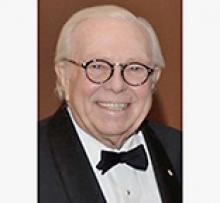 The family of John (Jack) Foster Fraser announce with heavy hearts their father's peaceful passing in Winnipeg on Saturday, July 24, 2021.
Jack is survived by his son, John (Myeong Kim) and grandsons, Tyler and Johnny; daughter Lisa (Darrell Gilmore) and their children, Harrison, Hannah, Jackson and Carter. He was predeceased by the love-of-his-life Valerie in 2002.
Born in Saskatoon in 1930 to parents Jack and Florence (Foster) Fraser, Jack was proud of his Scottish heritage and spent a life well-lived both personally and in the world of business. He graduated from the University of Saskatchewan with a BComm in 1952 and, following university and work in men's retail, Jack went head-first into business, forming Empire Freightways with two friends from University of Saskatchewan, the first of many entrepreneurial endeavours during his career.
Together, Jack and Val were the very definition of a "power couple" - he working and networking through many years of business, she being at his side as the perfect business spouse and hostess. Their parties were legendary! They embarked together on a fantastic journey that included many adventures and memories, and were happiest at their camp at Lake of the Woods and the condo in Naples, Florida where they made many lifelong friendships.
Jack's business career was nothing less than world class; his leadership and management skills were unparalleled through his career in Winnipeg with Federal Industries Ltd. in the 1980s and 1990s, leading to him being invited to join countless directorships across North America. Jack served as Chair of the Board of Air Canada, and as a member of the boards of Manitoba Telecom Services, Bank of Montreal, The Thomson Corporation, Ford Motor Co. of Canada, Coca-Cola Beverages Ltd., Shell Canada Ltd. and Investors Group Inc.
He was appointed an Officer of the Order of Canada in 1990, and proudly wore his "Snowflake" pin.
Jack was a significant contributor to the arts and cultural entities, working frequently as a leader to nurture important institutions such as the Royal Winnipeg Ballet, Winnipeg Symphony Orchestra and Royal Manitoba Theatre Centre.
He enjoyed jazz, Jaguars, Beefeater gin martinis, the Globe and Mail, and spending time with his family at the lake. He never shied away from sharing his opinions, and particularly appreciated a hearty political debate.
He genuinely appreciated his former Federal Industries colleagues who maintained a connection with him through his last years; he impacted the careers of a great number of Winnipeg business leaders.
A celebration of Jack's life is planned for Thursday, September 16, 5:00 p.m. to 7:00 p.m. at the Manitoba Club, 194 Broadway. In keeping with current health protocols, we respectfully ask that only fully vaccinated guests attend to ensure the safety and well-being of everyone.
In lieu of flowers, donations may be made to CancerCare Manitoba Foundation, 1160-675 McDermot Ave., Winnipeg, MB, Canada R3E 0V9 or support.cancercarefdn.mb.ca