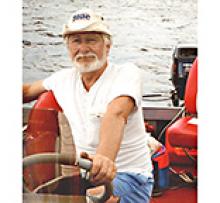 Robert (Bob) Roy Duch of Winnipeg, Manitoba passed away peacefully Wednesday, July 21, 2021, with his family by his side, in the Lake of the Woods District Hospital.
Bob was born May 28, 1935, and raised in the north end of Winnipeg as the youngest of two sons. Bob met Jessie at the age of 17 and married at 21, building an amazing life over 63 years and raising two successful children: Bob and Denise. Bob ensured his family would live a lifetime of happiness and little worries through his hard work of 36 years at the City of Winnipeg building his way up to the position of superintendent of Parks and Recreation. After retiring from his career, he then went to live his happiest years out in Reddit, Ontario with Jessie.
Bob had one of the most admirable work ethics; even in his retirement he was driven by filling his days with projects and chores. Bob always mentioned he was not artistic, but he didn't realize he had many creative talents such as his talent for building furniture from trees he cut down himself. Many of these pieces his family and friends still treasure to this day. His love for nature was admirable. He was always happy to be in nature, whether it be fattening up his feathered friends, fishing in Reddit, or cutting the grass. He was always his happiest to be outside followed by a good book and a nap on the couch.
Bob was a very passionate and wise man. For anyone who knew him, he was a self-proclaimed journalist, often writing letters to causes or companies he may not have agreed with or wanted to improve. He demonstrated a great deal of passion and he wanted to make a difference in our world. When in doubt, Bob was always the voice of reason. He was often a natural mentor and father figure to many, shedding light on many situations and sharing his words of wisdom. He often gave advice that may not have been wanted to be heard, but was needed for growth of the situation at hand.
Bob was so proud of his family, and they meant the world to him. He will be rejoined with his mother Nora, father Michael, and brother Merres (Duke) during his next journey. He will always be loved, remembered, and cherished by his wife Jessie, son Bob (Jill, mother Nancy), daughter Denise (Jake) Joyal, his grandchildren, Tamara (Deric), Jon (Sam), and Julie Joyal (Dan), his great-grandchildren, Madison and Daniel, and close nephew Dave (Shelly) as well as many other cherished nieces and nephews.
Bob cherished all his friendships and will be reunited with many of them. He will be greatly missed by the friends left behind.
The family would like to send our sincerest thank yous to Merle Jamieson, who has been a rock for our family, and the staff at the Lake of the Woods District Hospital who made his transition to his next journey comfortable. In lieu of flowers, donations to the New Horizons Senior Centre or Lake of the Woods District Hospital Palliative Care in memory of Bob would be greatly appreciated.
To celebrate the life of Robert Duch, the family will be having a Celebration of Life at the Reddit Community Centre August 8, 2021, at 1:00 p.m. Masks are mandatory.

As Bob always said,
"Drive safe and watch for the deer".

Online condolences may be made at
www.brownfuneralhomekenora.com