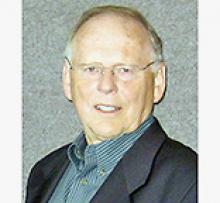 Charlie Buss, age 79, of Winnipeg passed away peacefully, with his wife by his side, on July 20, 2021, at Golden West Centennial Lodge.
He was a gentle, kind and loving husband, father and grandfather. He is survived by his wife Irene, of 56 years; and two daughters, Shandel (Tim) Happychuk of Winnipeg and Shawnda (Ash) Recksiedler of Colorado and two grandsons, Matthew and Ben. Also mourning his loss are brothers, John (Joan), Ron (Sharon), David (Bev), and many nieces and nephews.
Charlie was born in Whitemouth, MB on March 14, 1942 to John and Lydia Buss. He grew up in Whitemouth where he met his high school sweetheart, Irene, whom he later married in 1965. He joined Manitoba Hydro in 1960, early in his career he lived in Thompson and The Pas and progressed through different positions and he moved his young family to Winnipeg in 1970. He later retired from Manitoba Hydro with 37 years of service.
His hobbies include curling and golfing. When he was at home he was always busy helping his wife with her garden or doing home improvement projects. He was a jack of all trades and was always willing to help. Charlie was a loyal and dedicated family man and always put others before himself.
Thank you for all the wonderful years, your memory will be in our hearts forever. You will be dearly missed.
The family would like to express their deepest appreciation to Golden West Centennial Lodge for the kind and compassionate care.
Funeral service will be held on Tuesday, August 10 at 10:00 a.m. at Chapel Lawn, 4000 Portage Ave., Winnipeg, MB. All are invited to the outdoor service.