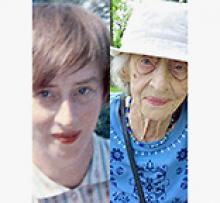 Our matriarch, Oma, and hero, Ruurdje, passed away on July 28, 2021 at the Grace Hospital, following a lengthy hospitalization.
She leaves to mourn her sons, Robert (Bei) and Thomas (Christina); grandchildren, Samantha (Rob), Sophia, Thomas, Benjamin and Willem VII. She was predeceased by her husband of 63 years, Willem Steur; sister Josephine Toxopéus; and brothers, Rudolf and Stephen.
Ruurdje was born in Utrecht on April 13, 1925. Her early years were difficult, and the family moved often. As a teen she chafed under the Nazi occupation, making do with whatever was available and accessing the black market as needed to provide for her three younger siblings. When she started working as a switchboard operator, Ruurdje quickly learned to use her position to aid the Dutch resistance, helping secretly connect underground fighters and alerting citizens who were in danger. Many times, she risked her life to make arrangements to help Jewish neighbours to safe passage. After the war, she worked for several successful Dutch businesses before landing a prime position in Luxembourg, with the forerunner of today's EU, where her proficiency in languages was appreciated. In the 50s Ruurdje met her lifelong love Willie, and they were married in Amsterdam on April Fool's Day 1953. Together they decided that their future lay in Canada, and in 1958 they emigrated, landing more or less by happenstance in Winnipeg. Both found employment, Ruurdje in administration at Children's Hospital and Willem at the Free Press. Ruurdje supported her husband throughout his studies and teaching career. She dedicated herself to full-time homemaking, looking after various furry animals, and being our Mama. In the 80s she completed a Certificate in Gerontology and embarked on a second career as a volunteer with Age & Opportunity and later with the Palliative Care Program at Riverview Health Centre. Ruurdje and Willem delighted in being grandparents and travelling. In her later years, Ruurdje revelled in the community at the Holy Family Home and Seniors Tower.
Profound thanks to the nurses, physicians, and all health care staff on the many units over the past four months.
No service is planned. In lieu of flowers, please consider making a donation to Age and Opportunity, Agape Table, Manitoba Possible, or your chosen charity, and then hoist a (root) beer to Ruurdje.

If there's another world, she lives in bliss; If there is none, she made the best of this.
- ROBERT BURNS (mutatis mutandis).