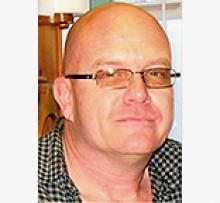 On July 8, 2021, John Boychak, aged 60 years, passed away peacefully at his home with family and friends by his side.
He is survived by his stepson Marshall Roberts (Marina); stepdaughter Natasha Roberts; step-grandchildren, Kaidyn Johnson-Roberts, Allan Johnson-Roberts, Vera-Lynn Johnson-Roberts, Corban Johnson-Roberts, Belle Roberts and Keira Roberts; former spouse and longtime friend Pamela Dauphinais; and close friend Kurtis Dmytruk (Anne).
John was predeceased in life by his parents, John and Mary.
In John's early life, he attended school in Winnipeg and his first language was Ukrainian. John learned to play the accordion as a child and later on in life, the saxophone. John danced with a Ukrainian dance troop and was in a German band with his father. John was also a member of the 6 Jim Whitecross Royal Canadian Air Cadets Squadron.
With his great sense of humour, John loved to laugh and to share that laughter with everyone. He was an avid reader and once said jokingly, that he made it to the end of the internet.
John had a wide variety of careers; tailor, security guard, welder, truck driver and landlord, just to name a few.
John created beautiful stained-glass pieces, regularly attended Monday pool night with the boys and enjoyed riding his motorcycle (of which he had many over the years). Riding was truly a great source of enjoyment for John. In 2013, he achieved Certification in the American Sailing Association.
In accordance with John's wishes, cremation has taken place and no formal service will be held.
If friends so desire, a donation in John's name may be made to CancerCare Manitoba.


Condolences for John's family may be left at
www.alternacremation.ca