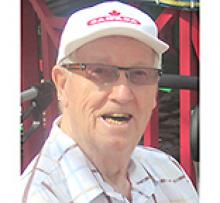 It is with great sadness that we announce Mervyn McGregor passed away peacefully at 93 years of age on July 18, 2021, at St. Norbert Personal Care Home, with family at his side.
Merv was predeceased by his parents, Ossie and Mary McGregor, and his beloved sister Doreen Jenkins. He leaves to mourn his nieces, Debbie Jenkins (Allan Rosky), Cindy Fraser (Glenn); nephew Jeffrey Jenkins (Mark Bishop); great-nieces and nephews, Jennifer, Ashley (Chris), Katie, Nikki, Theo and Remi. In addition, he leaves behind his cousin Margaret Gies (Dale) of Birtle, MB with whom he shared a close bond. He will also be remembered by cousins from BC to Florida, as well as many close friends.
Born and raised in Strathclair, Manitoba, Merv was always a popular man. Kind and caring, friendly and talkative, Merv was very likeable and made many close and lifelong friends. Always productive, Merv started working at a young age with his first 'real' job with the Choy's in Strath. Once his sister Doreen took over his duties, Merv moved on and became a schoolteacher at a one room school in Pine River. He was always proud of this part of his life and reminded us of it often. From there, Merv moved to Winnipeg to search for a career. He was hired by MTS and rose through the ranks to become supervisor. He worked 35 years and retired in 1983 at age 55. "Freedom 55" he would tell anyone who would listen! He never had another paying job after that!
Never one to be lazy, his kind and gentle nature was evident when he became a volunteer driver for the Canadian Cancer Society, chauffeuring patients to and from chemotherapy appointments. Merv always found time to fit one more ride in for someone. Merv joined the Gold Wing Ambassadors at Richardson Airport where he served in a concierge role showing passengers their way around. He was frequently singled out by the brass of Gold Wing for putting in the most hours and received many awards acknowledging his efforts. Merv enjoyed these interactions and the opportunity to meet new people.
Merv was always inquisitive and became a world traveller. He took numerous trips to Hawaii, Cuba, Europe and went on several cruises both in the Caribbean and Europe. Merv often travelled with close friends but if no-one was able to go, he would go alone. A river cruise from Budapest to Amsterdam at the age of 87, (against the advice of his three 'kids' as he referred to Debbie, Cindy and Jeff), illuminated his adventurous side and his zest for life. As well as a bit of his stubborn side!
Other hobbies included gardening, curling in earlier years, and shopping at Costco! He received awards for that too.
Cremation has taken place. A graveside gathering will take place at Strathclair Cemetery on Monday, August 9, 2021, at 11:00 a.m. Interment will follow in the family plot.
Flowers gratefully declined, please make a donation to CancerCare Manitoba.