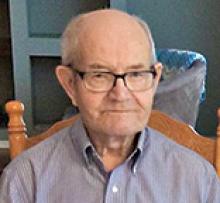 On July 25, 2021, at the age of 87, John passed away peacefully with his wife Jean by his side.
John was predeceased by his parents, Herman and Katherine Heide, sister Margaret Heide, brother Herb Heide, sister Katherine Hooge, brother-in-law Herman Hooge, sister Helen Heide, sister Anne Dewson, brother-in-law Jack Dewson, sister Agnes Woznow, sister-in-law Suzanne Heide and nephew Jeff Heide.
John is survived by his loving and supportive wife of 59 years, Jean; sons, Terry Heide (Marianne) and Wayne Heide (Maggie Scott); granddaughters, Melissa (Rob), Jamie (Chris), Becca, Daryl (Jeff), grandson Scott (Skyla), and great-granddaughters, Kaylee and Chloe. John is also survived by his brother Peter Heide.
John was born in the R.M. of Stanley and lived and worked throughout southwestern Manitoba until his early 20s when he moved to Winnipeg to work with Borger Industries, later Borland Construction. Starting as a labourer he worked his way up in the company to be a supervisor of a concrete crew responsible for large construction jobs. John took great pride in being a good provider and helping his family achieve financial stability and security.
John's faith was an important part of his life. He was an active member of his church; first Brooklands Community Church and later Crossroads Mennonite Brethren Church. He also spent many years volunteering at the MCC thrift store in East Kildonan. His faith supported him through his battle with cancer when he was in his late 40s and through failing health in his later years including the onset of Parkinson's.
If you would like to make a donation in memory of John, donations can be made to Parkinson Canada or CancerCare Manitoba.
Funeral service will be by invitation only due to COVID restrictions. A recording of the service will be available, please contact Chapel Lawn for log in information.