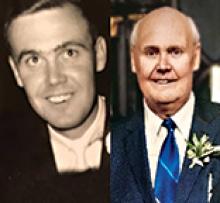 It is with great love and sadness that we share the passing of Richard Edward Gittins, our loving husband, father, grandfather, uncle and friend, on July 27, 2021.
He was predeceased by his parents, Stan and Anne Gittins, and brother David. He leaves to mourn his loving wife Joyce, son Kent (Linda), grandsons, Brett (Cheyenne), Cody (Jaiden), and son Christopher (Judy), grandchildren, Elizabeth, Matthew, and Alexandrea. In-laws, Carol (Gene), Ross (Connie), Jimmy, Leola, Haldean and many nieces and nephews.
Rich was born in Whitemouth, MB on May 3, 1938. He attended school at Seven Sisters until Grade 11. He completed Grade 12 at the University of Winnipeg, after which he attended the U of M and graduated with a degree in Civil Engineering.
Rich's goal in his life was to keep his family happy and cared for. He always supported Joyce, whether it was her singing career with Sweet Adelines, or with her business endeavours. He was a supportive father and grandfather, always interested in helping out if he was needed. His other love was hockey. He played for the Bisons at U of M and travelled across Canada, and as far away as Japan. His sons' friends nicknamed him 'Rocket'. He continued to enjoy playing the game until his early 70's. In the summer, he loved playing baseball with his Hydro buddies. He also loved downhill skiing in the mountains with family and friends. Rich loved the lake and spending time with the family. There were many special memories over the years with the boys, their families, and friends at LacLu, On. In the fall he enjoyed hunting and fishing with his sons, grandsons, and extended family.
From a young age, Rich's work ethic was formed by the summers he spent at his grandparent's farm in Whitemouth. Working with his cousins and his uncle Andy were some of the favourite days of his life.
Joyce and Rich got married in 1961 while Rich was attending university. After graduating, he worked for Manitoba Hydro for a short time and then moved to Toronto for two years with Shell Canada. Manitoba Hydro convinced him to come back to Winnipeg, and so began a long and distinguished career with Manitoba Hydro. He worked as the onsite project engineer in the North on the Churchill River Diversion, as well as many other projects.
After he retired from Hydro, he consulted with W.L. Wardrop Engineering.
Joyce and Rich enjoyed a full life through their 60 years of marriage. They loved to travel but were just as happy to be at the lake with the kids around them. That was Rich's greatest happiness, to be surrounded by family. He will be greatly missed by so many.
There will be a private service at St. Mary Magdalene on August 3 at 10 a.m. Graveside prayers will be in the Whitemouth Cemetery at 2 p.m. A Celebration of Life will follow at a later date. The service will be available online through the Bardal website, www.bardal.ca.