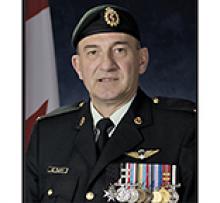 Aimé Joseph André Le Floch passed away peacefully on Thursday, July 29, 2021 at Cowichan District Hospital in Duncan, BC, after a long 10 year battle with cancer.
Aimé was born July 20, 1954 in Notre Dame de Lourdes, MB. He joined the Canadian Armed Forces when he was 17 years old. His career as a Physician Assistant had taken him to many parts of the world including Egypt, Germany, Bosnia and Yugoslavia as a United Nations Peacekeeper. Throughout his career, Aimé received many distinguished honours including Priory of Thanks in the Order of St. John Humanitarian Aid for providing aid, comfort and care to Kurdish refugees; Commander-in-Chief Citation for the opening of the airport in Sarajevo; the Most Venerable Order of the Hospital of St. John of Jerusalem; as well as various Peacekeeping Medals. Upon retiring from the Regular Force in July 1996, Aimé went to work full time as the Regional Cadet Medical Liaison Officer for the Canadian Cadet Organization in Quebec, Northwest Territories and Winnipeg, MB. After serving many years, Aimé retired in October 2010. Upon release from the Forces, he and his spouse retired at Lake Cowichan, BC.
Aimé is survived by his spouse, Theresa (nee Keck); son, Jacques; daughter, Julie (Martin Verret); stepson, Jonathan (Darcey); and grandsons: Vincent-Xavier, Thomas, Mathias; granddaughter, Stella; and William. He was predeceased by his mother and father as well as by sister, Lucille and brothers, Norm and Ron.
The family would like to extend a special thank you to Dr. Paul Terlien for all the care given over the years, as well as the CDH staff for the comfort they provided to Aimé during his last week.

Condolences may be offered online at www.sandsduncan.ca.