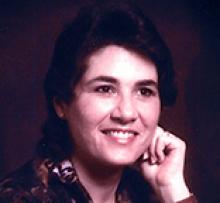 It is with profound sorrow that we announce the passing of Betsy Gibbons at the Grace Hospital on the evening of July 28, 2021. Betsy had suffered declining health for several years and there is some comfort in knowing that she now has relief from her considerable pain.
She is predeceased by her loving parents, Ida and Harry, as well as by her parents-in-law, Dorothy and Harry.
She is survived by her adoring husband of 52 years, Kenneth; and her devoted brother Robert Frender of Edmonton, AB. She is also survived by sisters-in-law, Nancy Reed, Anita Gras, and Alane Spencer, as well as brother-in-law Richard Gibbons. Her extended family includes cousins, Lorraine, Shelly, Erica, Ron, David and Carla. Among many nieces and nephews, Jesse has been especially close to Betsy and often a source of great wisdom for her.
While earning her BA at McGill, she travelled to New Jersey where she met future husband Ken. After luring him to Canada, they did graduate work at Carleton before moving to Winnipeg, where she worked in the public sector for decades as a sociological researcher, most notably at the Public Interest Law Centre.
She was an avid swimmer, hiker and gardener, and enjoyed travelling to Europe in her earlier years, and later in life to the American southwest. After retiring, she started a crafting business, selling her one-of-a-kind hairbands in several local stores. Dining out as a romantic couple with her husband, or with larger groups of friends, ranked among her most cherished activities. She was a witty and intelligent conversationalist, as well as a very warm, vivacious, and engaging personality. Her smile was infectious, but became less frequent in her last years, when multiple health problems prevented her from enjoying the activities that she treasured. Even so, she remained a loving wife to the end.
Cremation will take place, and a memorial service to celebrate her life is being planned for later in the year.
In lieu of flowers, please consider making a donation to the charity of your choice in Betsy's name.