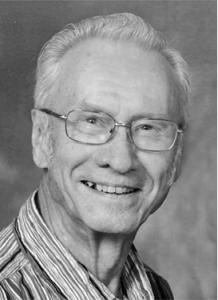 TOLE: Raymond Earl Tole passed away peacefully on August 1, 2021, at Hillcrest Place Personal Care Home in Brandon, MB. Left to remember him with hearts full of love are his wife and best friend Patricia; daughters, Janice (Mark) and Sandi (Mark); grandchildren, Nicole (John) and David (Becca); four great grandchildren, Alyssa, John Jasper, Cassidy and Tristan; sister-in-law, Marilyn; brother-in-law, Laurie (Lois), and many loving nieces and nephews. He was predeceased by his brother, Merle; sister, Lenore (Russell); brother, Mervin (Elva); one niece and one nephew. Ray was born on March 5, 1930 on the family farm near Crystal City, the youngest of four. He was educated first in a one room school house, where he enjoyed music, playing cornet and baritone in the school band. He also played guitar, accordion, and sang with a rich bass voice. He spent happy summers with cousins, moving around as a group between their various homes to spend time together. Hockey games were a part of Ray's school years and continued into his early adult life. He enjoyed baseball, golfing, and was an avid curler. He created a local baseball team especially for the boy who was to become his brother-in-law. He started his career in the Royal Bank as a junior clerk at the age of 19. He took courses from universities in BC and Ontario, was the youngest bank manager in his division, and held the position of Western Regional Inspector, based in Winnipeg. Ray retired in 1987 as manager at the Van Horne branch in Brandon. The nature of the job meant transferring all over southern Manitoba, and as a result Ray made many good friends over the years. He always had an active role in community organizations, and his head for numbers was often called upon. Ray and Pat met while he was working in the bank in Birtle. A look across the room was the beginning of 63 happy years of marriage. Daughters Janice and Sandi were born while in Rapid City. He loved helping on Pat's family farm and together they continued their love of music and dancing. Ray loved the outdoors, cooking over an open fire, gardening, making wine, genealogy, and crafting woodworking treasures. Month-long summer holidays in the trailer were spent driving across the continent with family, pets, a fishing rod, and often with a canoe strapped to the roof. In later life, Pat and Ray continued to travel extensively, including a trip to Alaska with their 5th wheel, visits to the Ireland of Ray's ancestry and the Yorkshire of Pat's, and a journey around Europe. A gentle and kind man with an infectious smile, he loved his family and shared his friendly and heart-warming energy wherever he went. A graveside service will take place at St. James Church, Solsgirth, MB, on Monday, August 9, 2021.