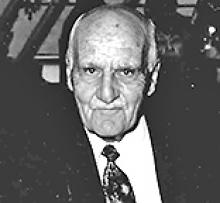 David Froese passed away peacefully on August 2, 2021, at Riverview Palliative Care.
David is survived by his daughter Lynnette Froese and her husband Rod Birch, his cherished granddaughters, Caryn and Allison Birch, grandson-in-law Eliya Ichihashi and his precious great-grandson Callum. David was predeceased by daughter Connie and his wife Margaret. David is also survived by his brother John Froese (Mary) and sister Margaret Kasak, sisters-in-law, Elnora, Mary and Verna, his Peters in-laws and many nieces and nephews.
David's teaching career began in 1946 and continued until 1992 in nine different schools in Southern Manitoba. He also taught Mathematics to many students in Winnipeg at Daniel McIntyre, Kelvin and Dakota. Dave was a passionate teacher whose patience in helping children and youth learn was in stark contrast to his "always on the go" personality. While his life was full of many sports activities and building projects until he was 90 there was no greater joy than spending time with his granddaughters, grandson-in-law and great-grandson or meeting a former student and reminiscing.
The family wishes to thank the support and caring from Lindenwoods Terrace, The Rosewood, Harold at Grace Hospital and Riverview Palliative Care. Thank you to all friends and family who have dropped by and kept in touch.
Private family celebration will be held.
This obituary may also be viewed at www.friendsfs.ca