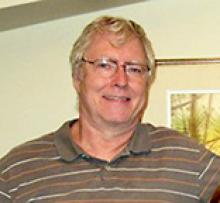 It is with great sadness that we share the news of Michael's passing on August 5, 2021 at the age of 73. Mike/Dad/Grampa will forever hold a special place in our hearts. Although his time with us was much shorter than any of us would have liked, we are so very grateful for the time spent with this wonderful man.
Intellectual curiosity has been a consistent theme throughout Mike's life. His love of learning led to a lifelong interest in science and mathematics, early adoption of technology and the Amiga computer, and most recently an interest in Bridge. Mike was an avid Bridge enthusiast, playing several nights/week before COVID. He was proud to have attained the rank of ACBL Life Master in 2018.
Mike grew up in Norwood Flats where he developed a lifelong love of basketball, which he played late into his late 50s. He attended Nordale School and Nelson McIntyre Collegiate, followed by the University of Manitoba. He then went on to have a 30-year career at Manitoba Hydro, from which he retired in 2011.
Even though Dad didn't always have the words, his unconditional love for both of his daughters (and later grandchildren) was felt until the very end. His daughters are so grateful to have had a dad who wasn't scared to talk about feelings. (Love you too, Dad. We always will).
In 2007, Mike met Donnie and they started building a life together soon after. Working on the Saturday New York Times crossword puzzle together was a weekly highlight. Mike was always up for long road trips as long he could drive and didn't have to do any planning. Together they enjoyed live music and volunteering at Folk Fest. Donnie's children, their partners, and granddaughter always felt welcomed and they grew to love him for his easy-going nature. He was delighted to meet each of his infant grandchildren and was fascinated with how they were developing unique personalities. The recent backyard visit with all of them present meant so much to him after the long separation due to COVID-19. Mike and Donnie were married July 8, 2021, a beautiful punctuation mark of the all too brief time they had together.
Mike was predeceased by his parents, Marian and George Gillis. He will be lovingly remembered by his wife Donnie (Donalda) Fridfinnson, his daughter Phoenix (Peter Schnabl) and grandchildren, Elijah and Arcadia, his daughter Veronica (Garrett Samm) and grandchildren, Fiona and Eleanor, and his daughters' mother, Marianne Gillis. Also by his brother Wayne (Sharon Nitschke) and nieces, Grace and Kathryn, and his brother Greg (Margaret Redmond) and nieces, Meagan and Jillian. He will be missed terribly by Donnie's daughter Davian (Brock) and granddaughter Helga, son Jeffry (Erin), son Stefan (Caleigh) and daughter Freyja (Dan).
A celebration of Mike's life will be held at a later date. If you are interested in attending, please sign up for notifications through the Neil Bardal Funeral Centre website.
In lieu of flowers, the family encourages donations in Mike's memory to CancerCare Manitoba or to the charity of your choice.


On Thursday, August 5, 2021, Michael (Mike) passed away at St. Boniface Hospital at the age of 73 years.
A longer obituary notice will follow.