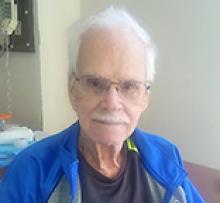 It is with great love and sadness that the family announces the peaceful passing of Stephen William Childerhouse on Tuesday, August 3, 2021, at Deer Lodge Centre, at the age of 97.
Dad was predeceased by his wife of 65 years, Alice Frances, in December of 2013. His six older sisters, Gertrude Lawson, Agnes Campbell, Julia Glynn, Wilhelmina Kunitzky, Geraldine Olsen and Georgianna Laviolette also predeceased their brother.
Our loving memories of Mom and Dad will be shared by their sons, Steve (Kristi) and Bryan (Lynne), grandchildren, Dan (Christele), Brad (Melanie), Chris (Erin), Cheryl (Simon), Mike (Elaine), Catherine (Jeff), as well as great-grandchildren, Danik, Neven, Emily, Anna, Sienna, Elyn, Breanna, Caleb, Evelynne, Eleanor, Micah and Griffen, as well as numerous nieces and nephews and their children throughout New Brunswick and Nova Scotia.
Dad was born in Saint John, New Brunswick, the youngest of seven children, the only boy. At the age of 18 he joined the Canadian Army and fought in the Second World War. When he came home in 1946 he met and found his lifelong love in Alice. Using the skills he had obtained in the war, he joined the Department of Transport as an electronics technician servicing landing equipment at airports in Eastern and Northern Quebec and Montreal. He retired at the age of 54 and he and Alice moved back to Saint John. Summers at their cottage at Ragged Point, where nieces and nephews were always welcomed. Winters were spent in Port Orange, Florida.
Dad was a true gentleman whose kindness will be remembered by all who knew him.
The family would like to thank the staff in Tower 5 at Deer Lodge Centre, especially Karen, for the special care and kindnesses that they provided Dad.
Cremation has taken place. No formal service will be held. A private family memorial will take place at a later date.
In lieu of flowers, donations can be made in Stephen's name to the Deer Lodge Centre Foundation, 2109 Portage Ave., Winnipeg, MB R3J 0L3, deerlodgecentrefoundation.com.