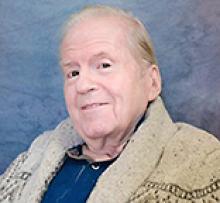 It is with deep sorrow and much love that we announce the passing of our husband, dad and grandad, John Clifford (Cliff) Thomas. Cliff passed away peacefully on August 4, 2021, in Winnipeg.
He is survived by his wife Maureen, daughter Billie (Barry), son Simon (Heidi) and his five grandchildren, Kyle, Jesse, Joey, Grace and Chelsea, and many family members in both Canada and in England. He was predeceased by his son Gareth, his parents and his three siblings.
Cliff grew up in England and lived next door to a beautiful young girl Maureen, who was destined to become the love of his life. They married in 1961 in England and came to Canada a few years later. Cliff and Maureen settled in Winnipeg and started their careers at Health Sciences Centre where they both worked until their retirements. Cliff also enjoyed volunteering his time, becoming a Cub Scout leader when he was younger and then a foster parent when his own kids where older and on their own.
Cliff and Maureen just celebrated their 60th wedding anniversary on July 1 with a love on that day that was just as strong as it was the day that they met. Alzheimer's slowly stole a lot of Cliff's memories over the past 16 years, but the love Cliff had for his family was untouchable. The voice of a loved one could always make its way through to him. Whether it was with a gentle smile on his face, one or two words softly spoken or a squeeze from his hand - we always knew Cliff could hear us and that he knew who we were.
Family was everything to Cliff. He especially loved spending time with his grandchildren. Grandad was always the "go to person" if you wanted a piece of chocolate or a mint and everyone always laughed at the handkerchief he carried neatly folded in his pocket.
Cliff was a very quiet man but was able to fill a room with a mountain of love without having to say a word. His kindness and gentleness will be remembered by all who had the pleasure of knowing him.
Heartfelt thanks go out to our dear friends - you have been a pillar of strength for us and to the staff at Meadowood Manor - you are truly special people.
In lieu of flowers, please consider making a donation to Meadowood Manor Personal Care Home in memory of Cliff.

A big piece of my heart lives in heaven now
....and he is my dad.