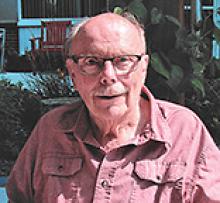 It is with great sadness that the family of John Randall Hofley announces his passing on August 2, 2021 at Pembina Place Personal Care Home in Winnipeg. After a lengthy battle with Parkinson's disease and other health issues, John is at rest. He no longer has to fight his body to move, think and stay alive. His being at peace makes us able to continue in our life journey with memories of good family times and a life well lived.
He was born in Winnipeg on September 9, 1939, grew up in East Kildonan and attended Miles Macdonell Collegiate from 1954 to 1957. He graduated with a B.A. from United College in 1961 and an M.A. and Ph.D. from the University of North Carolina in 1966.
John is predeceased by his parents, Fred Hofley and Olive Cann; his brother and sister-in-law, Deane and Dorothy Hofley and his sister Marion.
He is survived by Dolores, his wife of 58 years and his three sons and their families, Randall and Kathy, grandsons, Zachary and Simon of Ottawa; Todd and grandson Joshua of Toronto; Richard and granddaughter Breanna of Winnipeg.
John loved his work as a sociology professor and held various leadership positions at the University of Winnipeg for over 30 years. He was the Dean from 1992 to 1997 and retired in 2001.
Many colleagues were both his academic friends and his sports companions. He loved to golf, watch basketball and play squash.
John and Dolores' lives were enriched by travelling the world. They lived in North Carolina, India, Australia, Halifax and Ottawa. They travelled to many more places across the globe including Morocco, Switzerland, The Netherlands, Fiji, New Zealand, Tasmania, Dallas, Florida, Mexico and many more until 2011, when his physical ailments became too burdensome.
His family was very important to him and he enjoyed visiting with them as often as possible. His grandchildren were a source of interest and joy. Todd, Randall and Richard's visits with him at Pembina Place were especially meaningful, because he couldn't get to them.
Special thanks must go to those who visited him regularly, especially his sisters-in-law, Donna and JoAnne Minkus. The staff at Pembina Place worked very hard to make John's life as comfortable and interesting as possible. Their efforts during the Covid pandemic were exemplary and they are owed a great deal of thanks.
A family service was held at St. Gianna's Catholic Church on August 6, 2021 with interment at a later date in Neepawa Cemetery. In lieu of flowers, donations may be made to Down's Syndrome and any mental health agency of your choice.
May you rest in peace John, overlooking the golf course and surrounded by blue skies and many flowers in the summertime. You have more than earned your rest. You will live on in our memories and our hearts. God Bless.