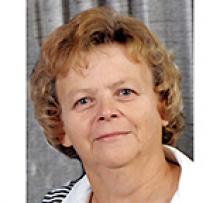 It is with great sorrow that we announce the sudden passing of our mother and grandmother at Grace Hospital on August 7, 2021.
Left to cherish Eleanor's memory are her children, Darlene (Bruce Peto), Angela, Bruce and Robert. Grandma will also be lovingly remembered by her three grandchildren, Carly and Brittany Peto and Gavin Karalash. Eleanor was predeceased by her father John Rybuck, her husband Joseph Karalash, her brother Maurice Rybuck, her mother Mary (Kozak) Rybuck and her brother Peter Rybuck.
Eleanor was born on November 22, 1940, in Vita, and lived on the family farm in Senkiw. She graduated from Manitoba Teachers' College in 1959, and taught two years in rural Manitoba before marrying Joseph Karalash on July 29, 1961. Eleanor continued to teach in "one-room schoolhouses" until the family moved to Winnipeg in 1968. Eleanor ran home-based businesses including Ukrainian egg decorating (pysanka) and Income Tax preparation. She was recognized as the family archivist, collecting and sharing anecdotes and was passionate about researching the history and contributing to the upkeep of the Senkiw Orthodox Cemetery. Other interests included collecting antiques and other eclectic items from auction, estate and yard sales. In her later years, with decreased mobility, she returned to creative pursuits, producing a plethora of lawn and garden ornaments.
Prayers will be said on Thursday, August 12, 2021 at 7:00 p.m. at Korban Funeral Chapel, 907 Main Street. Funeral Service and interment will be held outdoors on Friday, August 13, 2021 at 11:00 a.m. at Senkiw Orthodox Cemetery. The Very Reverend Miron Pozniak will be officiating with Cantor Martin Chobotar assisting.
In lieu of flowers, donations may be made to Senkiw Orthodox Cemetery Fund, c/o Patricia Gawronsky, Box 24, Roseau River, MB, R0A 1P0.