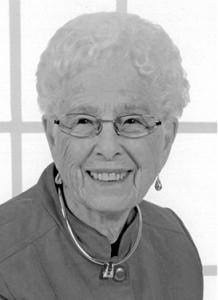 REID: On August 12, 2021, Marion Strachan Reid (McBride) went home to her Lord and Savior at the age of 101. Marion was born on April 28, 1920, in Crosshouse, Ayrshire, Scotland, the only daughter of James and Elizabeth McBride. She emigrated to Canada with her parents in 1923 and resided in Transcona, Manitoba until she entered the Women's Division of the RCAF during World War II. Marion married David Hunter Reid on June 8, 1946 and they resided in Kapuskasing, Ontario until retiring to Brandon in 1986. Marion was predeceased by her husband, David, on December 19, 1990. She is survived by two daughters, Janice Robinson (Bill) of Brandon and Elizabeth Robertson (Bruce) of Airdrie, Alberta; two grandsons, Ian (Andrea) and Todd (Melissa) Robinson of Brandon; two granddaughters, Laura Robertson of Airdrie, Alberta and Susan Robertson-Chudy (Michael) of Calgary, Alberta; one great-grand daughter, Ellie Robinson and one great-grandson, Barrett Robinson, both of Brandon. In lieu of flowers, memorial donations can be made to Helping Hands Soup Kitchen, 111 7th Street, Brandon, MB, R7A 3S5 or a charity of choice.

Her favorite hymn was,
It is Well With My Soul: "When peace like a river attendeth my way, when sorrows like sea billows roll; whatever my lot, Thou hast taught me to say 'it is well,
it is well with my soul.'"
Messages of condolence
may be placed at
www.brockiedonovan.com