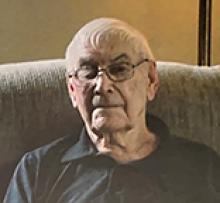 It is with deep sadness that we announce the passing of our beloved father, grandfather and great-grandfather on August 7, 2021, at the Eriksdale Personal Care Home at the age of 94.
Bill will be lovingly remembered by his three children, Richard (Karen), Joanne and George (Loretta); six grandchildren, Cynthia, Cortney (Rob), Nolan (Dana), Chris (Lehna), Jenna (Chris) and Tatianna (Stefan); nine great-grandchildren, Aubrey, Theo, Hadley, Kayley, Breydan, Emileigh, Johanna, Brielle and Bryson; sister Nellie Hillaby of Winnipeg and brother Mike of BC, along with many nieces and nephews.
Bill was predeceased by his wife Elizabeth (Betty) on February 16, 1970, his grandson Tyson on June 27, 2003 and son-in-law Neil Thage on September 14, 2020; his parents, John and Tatianna (Wazilowski); sisters, Helen Slater (2012), Mary Kanski (2014), Karolina Irving (2018), Pauline Olson (2016) and brother Peter Kansky (2021).
Bill was born in Foley, MB, moving to Winnipeg Beach at an early age. As a youth, he sold vegetables door-to-door in Winnipeg. He also spent time working in the mines until securing a job with Manitoba Highways. This is when he met his future wife Betty, who at the time was working in Winnipeg Beach renting out cabins. This job sent him and his family from Winnipeg Beach to Arborg and then onto Ashern. He retired from Manitoba Highways June 24, 1983. In his retirement, he enjoyed golfing daily with his buddies. He got a hole-in-one at the Ashern Golf & Country Club on the 5th Hole on June 30, 2002. He also enjoyed having a cold one after the golf game. He golfed many courses in Manitoba and the USA.
He was a caring man who loved his grandchildren and great-grandchildren dearly. He was a very generous person and would help out anyone that was in need.
Bill will be laid to rest with his dad, mom and sisters in the Winnipeg Beach Cemetery.
In keeping with Dad's wishes, cremation has taken place and no service will be held.
Special thanks to the staff of the Eriksdale Personal Care Home.