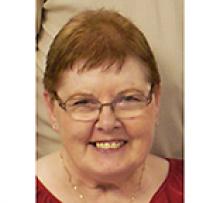 Judy passed away on August 4, 2021 after a short struggle with heart and health issues.
She is survived by her mother, Margaret June McTaggart, her son Allan Chop (Rosanne) and daughter Susan Charles (Mark), grandchildren, Aiken and Reese Chop, Katherine and Andrew Charles, and brothers, David Wynne (Shirley) and Jon Ted Wynne (Valerie).
A private family celebration of her life was held on Wednesday, August 11, 2021 followed by interment.
Judy married Ted Chop in 1964 while working at the Manitoba Telephone System. They moved to Selkirk for a few years and then moved to Gimli. When the marriage ended, Judy went to work for Manitoba Conservation in Gimli. She decided to move back to Winnipeg to be closer to her children and grandchildren and transferred to the Motor Transport Board. She developed many close friendships and was involved in the church fellowship of Charleswood United Church. While she struggled with health and mobility issues for the past number of years, her sudden decline and passing was unexpected and she will be missed.
In lieu of flowers, donations can be made to the Parkinson Canada - Manitoba.