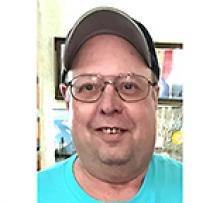 It is with sadness that we announce the tragic passing of Ken Poleschuk on Tuesday August 3, 2021 in a motor vehicle accident.
Predeceased by father Harry, mother Bertha, and younger brother Barry, Ken is survived by brother Larry (Peggy) Poleschuk, nephew Brad Poleschuk, niece Sheri (Keith) Riddoch and their daughter Sienna, nephew Keith Poleschuk (Sheryl), and their children, Emma, Laura, Hannah, and Benjamin. He will also be missed by many friends and acquaintances.
Ken was born May 13, 1953 in Winnipeg but lived his entire life in Arborg. Affectionately known as "Bear" he spent his working life at the Arborg Credit Union from where he retired several years ago. He was well known throughout the Interlake area which he travelled frequently in his search for all the 'good yard sale stuff'.
As per Ken's wishes, cremation has taken place and no formal funeral service will be held. A private interment will be held at a later date.