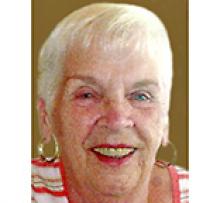 Dorothy Gardiner age 91, passed away peacefully at the Grace Hospice on August 4, 2021. She was born October 7, 1929 in Winnipeg, Manitoba to Roy and Burel French.
While attending Gordon Bell High School she met, dated and on October 22, 1947 married her best friend, true love and devoted husband of 72 years, Douglas in a beautiful ceremony held at the Westminister Church on Maryland Street in Winnipeg.
Dorothy (Dode) loved people and was always the first to lend a helping hand. Forever a good sport with an extremely quick wit Dode was easy going enough to put up with Doug's love of training race horses and later turned into a fantastic handicapper at the Assiniboia Downs.
Dode's favourite job was that of a devoted mother and homemaker, but Dode also worked for the Assiniboia Downs, Canada Revenue Agency, and later for the Breadman Bakery and Adhere Distributors and Consultants, both of which were family owned businesses.
Dode is survived by her husband and best friend Doug, son Roy, daughter-in-law Colleen and grandchildren Tyler (TJ), granddaughter-in-law Alex, Quaid and partner Nicole and the special family member/son Oliver.
While there is no formal service planned, as per Dorothy's wishes, a simple intimate gathering is planned for the immediate family.
An informal Celebration of Life is planned for a later date, where friends and family will be welcome to stop by to share stories and memories of the life and times of a very special wife, mother, friend and remarkable person that Dorothy was.

In lieu of cards and flowers, the family would ask that you make a donation to Alzheimer Society of Manitoba Inc.