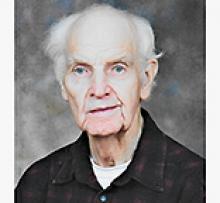 From the farm land, to the town, and then the Third Crossing Manor, Uncle Eddie spent his life in Gladstone, Manitoba, to say goodbye just months short of his 96th year.
Predeceased by his seven brothers and five sisters and leaving behind numerous nieces and nephews. His nephew Jim Craik of Winnipeg continued to visit until the end, and kept Eddie's eye shining and memories alive by talking and laughing about the past antics of family, leaving Uncle Eddie with that sly smile that no one could mistake.
We would like to thank the staff of the Third Crossing Manor for the care they gave to Edwin Norman Craik, an END OF AN FAMILY ERA.
Funeral service will be held on Sunday, August 15, 2021 at 2:00 p.m. at Clarke's Funeral Home in Gladstone.