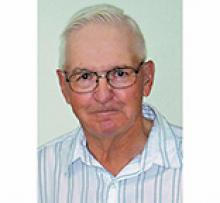 It is with profound sadness that we announce the unexpected passing of Bryan, our Husband, Dad and Grandpa (Pa) at the Stonewall Hospital.
Bryan is survived by his loving wife of 55 years, Bernice; his children, Mike (Laura) and Lori (Kevin); his beloved grandchildren, Brittany, Alycia, Evan, Aidan, Ethan and Owen; brother Gerry (Dorothy) Palmer; sister-in-law Florence Poloski (late husband Andy); many nieces and nephews; his lifelong friends, Jim Minaker (his partner in crime) and Janet and Joan Fisher (late husband Dave). Bryan was predeceased by his grandson Matthew.
Bryan, the youngest son, was born to William (Bill) and Winnifred (Winnie) Palmer on September 5, 1942, in Winnipeg. He grew up on the family farm at Grosse Isle. Bryan and Bernice raised their family on the farm and Bryan was proud to have his son Mike and grandson Evan take over the family farm. His first job was at Oakland Hatchery in Winnipeg.
Bryan was always interested in machinery and took courses at Red River Community College. Bryan worked as a mechanic over the years at Agro Equipment, Argus Farm Equipment Ltd. and International Harvester. In 1979, Bryan moved to Cummins Mid Canada, where he started as a mechanic, served as shop foreman and retired as a customer relations representative. Upon retirement, Bryan began his own business venture, Palmers' Parts. He enjoyed creating connections with his customers, telling stories and sharing his passion for anything mechanical. Bryan was one of the founding members of the Rosser Volunteer Fire Department, helping his neighbours and community.
Bryan's hobbies centered around farm life and were shared and enjoyed with his friends and family. These hobbies included old-time threshing, attending the Manitoba Threshermen's Reunion in Austin, a farm tractor toy collection and travelling to toy shows to add new pieces to his collection. Bryan was one of the creators of the Stonewall Toy Show that ran for ten years and was enjoyed by young and old. Over the years, Bryan met many people and seemed to know someone everywhere he went.
Bryan and Bernice travelled to many destinations in North America with friends and family over the years, taking in the sites and scenery. Their favourite vacations were the two spent on the beach in Mazatlan, Mexico and the bus trip to the East Coast of Canada with Les and Joan. Bryan enjoyed going for drives, looking at crops and he always knew a shortcut or the best way to get to your destination.
Bryan and Bernice were proud spectators at their grandchildren's many sporting events including figure skating, hockey and fastball.
The family would like to thank Dr. Graham and the entire staff of Stonewall Hospital for the wonderful care Bryan received.
A private family interment will be held at Stonewall Cemetery. A Celebration of Life will be held at a later date.
In lieu of flowers, if friends so desire, donations can be made to STARS Air Ambulance – STARS Donations (Manitoba Division), 1441 Aviation Park NE, Box 570, Calgary, Alberta, T2E 8M7. Donations can also be made by calling 1-855-516-4848.