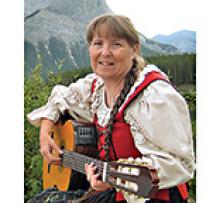 It is with great sadness, that we announce the passing of Corinna Kruger after a 36 year battle with complications brought on by kidney failure. (August 1986 Kidney Transplant, April 2004 to November 2020 Peritoneal Dialysis, November 2020 to August 2021 Hemodialysis)
She was predeceased by her father Harry, and is survived by her mother Heidi and her longtime partner Patrick.
Corinna was born in Winnipeg, Manitoba.
In her early years, she took up figure skating in Ravensburg, Germany, where her father played hockey and she would sometimes entertain the audience during the intermissions. For many years she was a member of the Winnipeg Winter Club where she continued figure skating, taking part in and winning many competitions.
Corinna also obtained her black belt in Tae Kwon Do.
By the late 1970s, Corinna began her singing and yodelling career and by 1979 she asked her aunt Carol to join her until 1991, when Carol got married and Corinna was left on her own. She provided a variety of music for many occasions. She specialized in Alpine singing and yodelling, while accompanying herself with the guitar. She wrote and performed her own songs, as well. Her first television appearance was also in 1979. Since that time, she had performed on television and radio a number of times. As a member of Folklorama, Corinna performed at the German, Swedish and Alpine pavilions, at various Oktoberfests, senior homes, hospitals, schools, churches, birthday parties, business conventions, and many other cultural and special events throughout Canada, the United States and Germany. At the Alpine Pavilion she also was a member of The Edelweiss Schuhplattler. While in Germany, she joined the Church Band TOJUS of the Thomaskirche in Pforzheim. Throughout her life, she enjoyed meeting people and making them happy through her singing.
Besides her love for music, she liked nature, birds and animals. She always carried a camera with her to take some great pictures while on scenic drives or hikes. Corinna left us with her recordings "Erst wird g'jodelt" (with her aunt Carol) followed by her own song recordings "Yodel of the Alps", "Herzliche Bergesgrüsse" and "Miracles" and thousands of pictures to remember and enjoy.
Corinna made many friends and admirers throughout her lifetime and always had a smile for them. She will be dearly missed by all who loved her.
Thank you to all the health professionals and staff of the St. Boniface Hospital, Health Sciences Centre and Kreiskrankenhaus Offenburg, Germany that helped since 1985 to keep her alive. Special thanks to Dr. Martina Reslerova her first and last Doctor on PD and Hemodialysis since 2004.
As per Corinna's request, a private graveside service will be held.
In lieu of flowers, donations may be made to the Kidney Foundation - Manitoba Branch, 452 Dovercourt Drive, Unit 1, Winnipeg, MB R3Y 1G4.