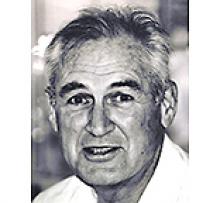 It is with shock and sadness that we announce the passing of Norm, who died peacefully in his home at the age of 86.
He leaves to mourn his soulmate Elsie "Cee", with whom he would have celebrated 66 years of marriage on September 1, along with his son, Seann; daughter, Leanne (Mark); his beautiful granddaughter, Grace Lynn; his two step-grandsons, Tim and Eric; brothers, Billy, Art (Deenna), and Gary and numerous nieces, nephews and their families.
Norm was predeceased by father, William; mother, Marie (nee Chase); brother, Tommy and by the special mother-in-law that he doted on "Baba" Rose Hutsul.
As the eldest of five boys, Norm was a hard worker by nature; at age 11 he began deliveries on his bicycle regardless of the weather. As a teen he participated in the Air Force Reserves and eventually, as a lover of music, he briefly joined the Stadacona Band then later the Naden Band, both of the Royal Canadian Navy.
After leaving the Navy, he met and married Elsie, began a family and continued his lifelong commitment to learning while working at Niakwa and Southwood Golf Courses. From there he took a position as greenskeeper at Transcona Golf Course, where he helped design and then rebuild the nine hole course into 18 holes and eventually became greenskeeper at Wildwood Golf Course, where his decision to build the dyke there, saved the course from numerous floodings.
Norm was hired by the (then) City of St. Vital, to manage all parks and the swimming pool and oversee the completion of the St. Vital Arena, and later hired by the City of Winnipeg. He made many contributions while working first as a Superintendent of Grounds and later Supervisor of Forestry Department, including helping to develop and implement the city's Dutch Elm Disease Program, thus helping to preserve our beautiful canopy of trees for future generations. He retired from the city in 1992.
Norm never backed down from adversity, either in his professional or private life and often rose from life's challenges even stronger. As a cancer survivor, he was proud to participate in fundraising for "Relay of Life" (CancerCare).
He enjoyed golf, playing his trumpet and regularly attending Assiniboia Downs for horseracing, but his greatest pleasure was getting together with family over a few drinks and a great meal, and telling stories.
Through all of this, Norm never wavered in his commitment to helping others; family, friends or strangers. If there was a need, Norm was there in whatever capacity was helpful, whether you wanted help or not. He loved people and never allowed their flaws to overshadow the good in them, and he saw beauty in their humanness. He possessed the remarkable ability of always finding the humour in any situation, and joy in the camaraderie that inevitably arose.
He was a good man, loved by many and will be greatly missed by all who knew him.
Please contact Chapel Lawn Funeral Home for the live streaming information between 9:00 a.m. to 4:00 p.m.
In lieu of flowers, donations can be made in Norm's memory to CancerCare of Manitoba

"Until we meet again, my Love"