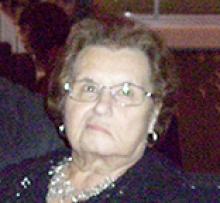 It is with heavy hearts that we announce the passing of our beloved wife and mother, Violet Bretecher, at 80 years of age in Ste. Rose du Lac, Manitoba.
Violet was born on January 14, 1941 in Elphinstone, Manitoba, the second child of Nick and Mary Ellchuk. Along with her older sister Victoria (Vickie) and younger brother Dennis, Violet attended Providence School, a one-room prairie schoolhouse. Growing up, she enjoyed the typical activities of farm life. Violet liked working in the house and garden and playing with her siblings and cousins that grew up nearby. In her youth, Violet contracted polio and spent many months in the hospital in Winnipeg, but was able to keep up with her school work despite the illness with fierce determination and hard work.
After receiving her Grade 12 diploma in 1961, Violet decided to become a nurse. She moved to Winnipeg, staying with her Uncle Bill and Auntie Ann on Hartford Avenue and took her LPN training at St. Boniface School for Practical Nurses. Violet graduated from her training in 1962 and moved to Ste. Rose du Lac where she worked in the hospital for seven years. Violet performed many duties and was especially adept at caring for the newborns in the maternity ward. She made many good friends during her stay in Ste. Rose, including Huguette Lariviere, Doreen Brown and Kathy Inkster. She travelled and camped across Canada with some of her nursing friends to locations such as Quebec and Alberta with stops at Gaspe Peninsula and the Columbia Icefields.
In the late 1960s, a number of the Ste. Rose nurses met some young farmers from Toutes-Aides. Violet was one of those nurses, as she met and became engaged to Alfred Bretecher, marrying on October 11, 1969. Their honeymoon was a whirlwind affair with stops in Atikokan, Kenora, Minnesota and Winnipeg. Violet traded in her nursing hat and shoes for a warm toque and rubber boots as she settled into a life on the farm. Violet and Alfred had two children, Jeffrey, in 1972 and Shannon, in 1977. Violet worked hard in her garden, producing a yearly bounty of vegetables. Violet was also busy in her home caring for her family. Cooking, cleaning, raising children, helping with chores, and assisting in running the business end of the family farm, Violet was always a very busy woman. Chickens and cats and cows alike loved when Violet came by with a pail of chop or veggies. She was fearless driving the quad with the dogs following close behind.
In 2001, Violet and Alfred decided to retire and moved to Brandon where they lived for four years. They became very close with their next door neighbours, Ray and Mary Lou, but they missed their life back home, built a house in Ste. Rose, and moved in October 2005. During their retirement, Violet enjoyed attending the Jolly Club, bingo, church, camping, and the occasional casino excursion. Most of all, Violet enjoyed meeting up with her friends, whether it was in her home, the local Chicken Chef, or camping at Hecla or Manipogo Beach. The highlight of every year for Violet and Alfred was attending the Manitoba Society of Seniors games in various locations in the province. She excelled and won medals in cribbage, carpet bowling, and whist. The best part of the games was attending the banquets, where they got to make new friends and catch up on fun times with the old ones.
For their 40th wedding anniversary in 2009, Violet and Alfred's children treated them to an Alaskan cruise on Celebrity Cruises complete with airfare, a limo to and from the airport, and champagne and flowers in their suite. Ports of call included Ketchikan, Juneau, Skagway and Glacier Alley. Violet was only a little bit nervous for her first time being on a plane and large ship.
In 2011, Violet was diagnosed with breast cancer. She had a lumpectomy and received radiation treatments. She was cancer free for eight years but unfortunately the cancer returned in 2019 and metastasized to her bones. She chose to keep her illness private, only sharing the news with her husband and children. She enjoyed the time she had left, even camping only one month before her passing on August 15, 2021. She was surrounded by her family, who never left her side and cherished every moment they were fortunate enough to spend with her.
Memorial service was held on Friday, August 20, 2021 at 11:00 a.m. from Ste. Rose de Lima Roman Catholic Church in Ste. Rose du Lac, MB with Fr. Patrick Neufeld officiating. Interment followed in Toutes Aides Parish Cemetery in Toutes Aides, MB.