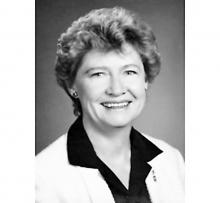 Born in Winnipeg to the Honourable G.S. and Edna Thorvaldson on April 5, 1928;
passed away on Monday, August 16, 2021.
She leaves to mourn her husband Bob; her sons, Rob (Lorette Cenerini), Jon (Lisa) and Kevin (Kim) of Winnipeg; her son-in-law Hank MacComb of Kelowna; her daughter-in-law Evelyn of Winnipeg; her sister Ruth Gair of Calgary; twelve grandchildren, seven great-grandchildren and a goodly number of nieces and nephews. In addition to her
parents, she was predeceased by her son
Peter, by her daughter Linda MacComb and by her sister Nora Hansell.
Eleanor was raised in Winnipeg, the eldest of the three Thorvaldson girls. She attended Kelvin High School and subsequently the
University of Manitoba where, in 1949, she earned her Bachelor of Arts degree. She and Bob were married in 1950, and in 1951 moved to Montreal where Linda and Rob were born. They returned to Winnipeg in 1954 and the balance of her life was spent here.
Eleanor was a caring, independent woman who enjoyed lively conversation with family and friends. While sophisticated, charming and delightful to meet, she was also, for those who knew her well, an adventurous lady with a mind of her own which she clearly
expressed when moved to do so.
She and Bob had five children and it made for a busy household. She managed it with love, respect, kindness, grace, a wonderful sense of humour and the innate skills of a
juggler, making her home a warm and welcoming environment for family and friends alike. In some wondrous way she held it all
together, for which Bob and the children will be forever grateful.
She was committed to the community in which she lived a long, happy and productive life. That commitment found expression in her volunteer work. She served on the Board of the Winnipeg Day Care Centre - the first such facility in the city, as Treasurer of the YWCA, as Secretary of the Women's
Canadian Club, was a member of the St. Agnes Guild, drove for Meals On Wheels as a long time member of St. Andrews River Heights United Church, was a leader in CGIT, and a long time supporter of the Manitoba
Opera Association where she served as
President from 1982-1984. Her leisure time, such as it was, was taken up by, among other things, music and dance, book clubs, curling, bridge, golf and summers at the lake.
While she shall be sorely missed, she shall also be long remembered by those who knew her and loved her so deeply.
The family would like to extend its deep
appreciation to the palliative care staff at Riverview Health Care Center for their thoughtful and compassionate care of Eleanor during the final months of her life.
As a result of COVID, a private service will be held for immediate family members.