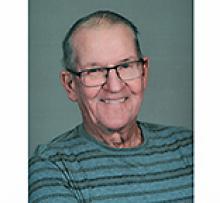 Doug Erb passed away August 18, 2021, peacefully, with family at his side, after a brave battle with cancer.
He is survived by his wife of 59 years, Marilyn (nee Stenberg); sons, Brad (Louise), Jamie (Cheryl) and Derek (Erin); daughter-in-law Kristine; grandchildren, Brodie, Madison, Michael, Jed, Molly, Misty, Connor, Mckenzie, Taylor, Maggie and Grace; brother Fred (Lois); sisters-in-law, Dorothy, Bev and Cisca; brother-in-law Doug (Kathy), along with many nieces and nephews.
Doug was predeceased by son Tim; parents, Ted and Hazel Erb, fathers-in-law, Mervin Stenberg and John Johnson, mother-in-law Alice Johnson; brother Gary and brothers-in-law, Randy Johnson and Don Fossay.
Dad lived his entire life in the Oak Bluff area. He grew up on the family farm and after marriage on August 29, 1961, Doug began farming with his father and brother Gary. As his boys grew up and started their own careers he later farmed with three of his sons before semi-retiring in his late 60s.
Dad was a good athlete and as a young man particularly enjoyed playing hockey and baseball. It was at a baseball tournament that he met Mom. Sports were a lifetime passion for Dad, he gave of his time freely coaching both hockey and baseball for many years, he was a mentor to his four sons as well as many youth in the community, Dad was proud to be a part of the community members that built and ran the Oak Bluff Recreation Centre.
In retirement Mom and Dad spent many years in Brownsville, Texas. It was in Texas that he rekindled a passion for fishing. Many friendships were formed in Texas and Dad's skill in carpentry shined as he became known as the park contractor. He was forever lending a helping hand. Summers were spent around the farm yard mainly in his beloved garden.
As the family grew and grandchildren arrived they formed an inseparable bond. He spent countless hours with his grandchildren enjoying each other's company. He loved doing small tasks with them and telling stories from times long since passed. They were his pride and joy. He would light up a room when speaking of their accomplishments.
Thanks to Dr. Hayward and Dr. Tan for their long term care, Southern Health, many family and friends who provided support and a special thanks to Daphne Goodridge for her love and compassion for Dad near the end.
A private family service will be held for Dad. An interment will take place at Oak Bluff Cemetery on Tuesday, August 24, 2021 at 12:00 noon. Friends are welcome to join the family. No reception due to Covid-19.
In lieu of flowers, donations can be made to Oak Bluff Cemetery C/O RM of Macdonald or CancerCare Manitoba.