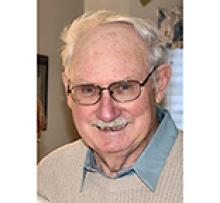 Ronald was born on May 31, 1935, in the Village of Carlowrie, MB, to parents, John and Mary Baron.
He married Jean Fostey in 1954, and had three sons, Darryl (Sharon), Duane (Karen), and Brent (Carrie), seven grandchildren, and three (and 2/3) great-grandchildren.
Ronald commenced teaching in the Winnipeg School Division in 1953 and taught in various schools at various grade levels. He was appointed as a School Administration / Principal in 1968 and retired in 1993 as the Principal of St. John's High School (Winnipeg).
He moved to Kamloops with Jean enjoying 28 years of retirement participating in Fly-fishing, golf, curling and watching sports of all types. Ronald was a member of the Kamloops Seniors curling club for 24 years, which included participation in the executive committee. He enjoyed the life of strata living being active in council and president for 28 years of the Baron Garden's Strata. He was President of the Kamloops Ukrainian Orthodox from 1993 to 2015.
Thanks and appreciation to the wonderful staff Ponderosa Lodge and Hamlet Westsyde for their sincere care of our beloved Husband / Father.
In lieu of flowers, please make donations towards the Kamloops Ukrainian Orthodox Church.
The Funeral Service will be held at 10:00 a.m. on Saturday, August 28, 2021 in the Ukrainian Orthodox Church of All Saints, 1044 - 8th Street, Kamloops, BC V2B 2X8. Father Chad Pawlyshyn will officiate. Following the Service, Ronald will be laid to rest in Hillside Cemetery, Kamloops, BC. The Service will be streamed on the Church YouTube page https://www.youtube.com/ channel/UCe6A7ugZyKfD8HwlLAsgN9g.

Condolences may be sent to the family from www.kamloopsfuneralhome.com