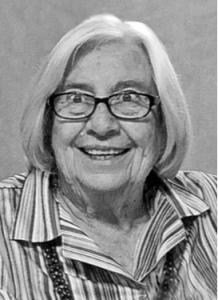 WOTTON: Irene Louise, age 92 years, passed away peacefully on Sunday, August 8, 2021 at the Brandon Regional Health Centre. Irene was born on May 12, 1929 at her parents' home in Brandon. She attended Central School, Earl Haig Junior High and graduated from Brandon Collegiate Institute in 1947. While attending high school, she had a part-time job working the lunch counter at the Manitoba Transit Bus Depot. She also worked at Ile's Hardware Store, where she said her lifelong love of "pretty" things started. Other employment followed as a bookkeeper at the local Wheat City Business College, General Bakeries and the Scott Fruit Company. She and Ralph married on November 19, 1949. As her family grew, renting cabins at nearby lakes or camping in a tent, and eventually a trailer Ralph built to accommodate five children, became the annual summer tradition. In 1977, the trailer was replaced with a van converted to a "mini-motorhome". Ralph and Irene travelled the country, coast-to-coast in their van until the late 1990's. For many years, starting in the late 1950's, Irene was involved with Central Community Centre, helping to organize fundraising activities, carnivals, rummage sales, etc., and served as Treasure for several years. She was also a Cub Leader, with the title of "Balou", during the late 1960's. Irene was very interested in antiques and other collectibles, joining the local antique club in 1986, and served as the Treasurer for a time. She also rented tables at many flea markets around the province, selling items and meeting other collectors during the 1970's and 80's. An annual backyard sale on May long weekend was always a family event. One of her most cherished collections was her Brandon collection, items known as memorabilia relating to the history of Brandon. Irene also loved gardening, and her flowerbeds and containers were always meticulously tended each summer. During their retirement years, Ralph and Irene would enjoy driving the van to small towns around the province, finding the perfect spot to enjoy an afternoon tea and spending their Saturday mornings driving around to garage sales. Many hours were also spent with their grandchildren and great-grandchildren. Irene will be lovingly remembered by her five children DuWayne, Karen, Brian, Brenda (Mark) and Val (Dan); her grandchildren Lynne, Audrey, Jennifer, Cory, Tami, Nicole and Janelle; and great-grandchildren Julian, Belle, Thomas, Zoe, Scott, Sean, Marlee, Myles, McKinley, Lennon, Louis, Andreus and Maria. She will also be remembered by her brothers Maurice (Liz) and Jim (Liz), and numerous nieces and nephews. She was predeceased by her husband Ralph, who passed away in 2015, and her two sisters Florrye and Margaret. Irene was heartbroken by the loss of her granddaughter Tara in 2017. In lieu of flowers, donations in memory of Irene may be made to Funds for Furry Friends, #208-740 Rosser Avenue, Brandon, MB R7A 0L9 or the Southwestern Manitoba Animal Rescue Team, 652 Franklin Street, Brandon, MB R7A 5R1.

"Remember that grief
is a statement that you
loved someone,
not a problem to be solved".
Expressions of sympathy may be made at
www.memorieschapel.com