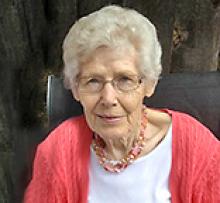 It is with sadness that we announce that Mary Bergen passed away peacefully in the presence of her children on Monday, August 23, 2021.
Left to cherish her memory are her children: Rolfe (Evelyn), Hugo, Valerie (Gerry), Dorothy (Brian), and Nancy (Minson), 12 grandchildren, three great-grandchildren, two brothers and two sisters. Mary was predeceased by Peter, her husband of 65 years, her daughter-in-law Theresa Sullivan, two brothers and one sister.
Mary was born in a Mennonite colony in the Ukraine. Living under Stalinist rule, conditions were difficult and were made more so when her father was taken away by soviet soldiers in 1938. Following the war, the Harder family (except for her eldest brother) was fortunate enough to escape to the west and avoid remaining in the USSR. After coming to Canada the Harder family eventually settled in Winnipeg in 1948. Mary met Peter in an English language class in 1951 and they married on May 30, 1953.
Shortly after they married, she began her life as a homemaker and mother to five children. She was an accomplished seamstress and gardener, particularly vegetables. Beyond her work as a professional seamstress, she expertly designed and sewed numerous wedding dresses for those close and dear to her. Her garden would yield enough produce to carry her family through the winter months by way of her expert canning and pickling. Another one of her interests was singing and she enjoyed participating in a variety of choirs.
Mary, along with Peter, spent their retirement years enjoying the winter months in Palm Springs, and the rest of the year travelling from Winnipeg to BC and Chicago (as well as trip to Australia), visiting and helping their children establish their own households.
In recent years, Mary resided at Harmony court and we thank the wonderful staff who treated her so well and became like extended family during the last 18 months.
Mary remained deeply committed to her faith throughout her life. It was the essence of her being, providing comfort and strength, throughout her life. Her positive outlook was an encouragement to all who knew her.
There is a private family Celebration of Life taking place on Saturday, August 28, 2021 at 11:00 a.m.