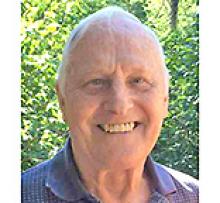 Peacefully on August 20, 2021 with his family by his side, Bill passed away at St. Boniface Hospital after a courageous battle with cancer.
He was predeceased by his parents, Anton and Katherine, and his daughter Linda. Left to cherish his memory are his sister Hilda; brother Tony; partner Shirley Gaudry; son Randy (Debra); daughter Tracey (Rick) Hunt; as well as grandchildren, Tyler, Braden, Jordan, Corinne, Ryan, Mathew and Brittany; and great-grandchildren Riley, Smith and Liv.
Bill was born on December 8, 1934 and grew up in the West End. He attended Daniel McIntyre High School where he became passionate about football. He was a member of the 1955 Winnipeg Rods Championship team which would later be inducted into the Manitoba Football Sports Hall of Fame.
Bill started with TCA, later Air Canada and enjoyed an almost 35 year career which allowed him to travel to many parts of the world. The cottage at Lester Beach was a mainstay during the summer and where some of the most cherished memories were created with his children, grandchildren and friends. He retired in 1991 and would then split his time between the cottage, wintering in Florida and later in Victoria, BC until his health would no longer allow him to. Despite his health setbacks the past few years, he always remained positive and upbeat.
The family would like to thank Dr. Niraula and his team at CancerCare as well as the staff in the Palliative Care unit at St. Boniface Hospital who gave him exceptional comfort and care during his short time there.
There will be a private family ceremony at a later date.
In lieu of flowers, donations may be made to CancerCare Manitoba or a charity of your choice.