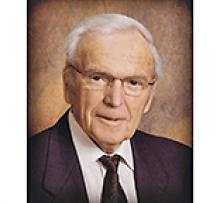 With heavy hearts the family of Bob Hopley announces his peaceful passing on Wednesday, August 25, 2021 in Brandon, MB at the age of 87 years.
Bob was born on December 18, 1933 in Redvers, SK to Gilbert and Lucy Hopley and brother to sisters, Jean and Eunice. They moved to a farm near Manson, MB in 1936. Then in 1946 they moved to a farm at Oak River. Bob completed his formal education at Oak River High School and started farming full time. He met his life partner, Lynne Shanks of Rivers. They married on July 24, 1964 and became the proud parents of their four children, Leanne, Allen, Glen, and Susan.
Bob continued his agricultural education at the Manitoba Department of Agriculture's Extension Centre in Brandon enrolling in numerous courses such as welding and farm management.
Bob was a well-respected and passionate farmer. He specialized in crop production and pedigree seed. He was awarded by the Canadian Seed Growers Association for 25 successful years of pedigreed seed production.
Bob had a sharp agricultural mind and was a talented forward thinker. He was very active in the agricultural community locally, provincially, and federally and made many contributions. Bob chaired and served on numerous boards and committees, including: Western MB Farm Business Association; Farm Credit Corporation Appeal Board (1974 to 1986); RM of Blanchard Council; Bank of Montreal Agricultural Advisory Panel (1982 to 1984); CBC Advisory Committee for Food and Agriculture; Western Grain Stabilization Advisory Committee; National Safety Net Committee for the Grains 2000 Project; National Management Committee for NISA; and an honorary member of the Manitoba Institute of Agrologists (1990).
Bob originated the concept of the Net Income Stabilization Account (NISA). Within approximately 12 years of implementation, Canadian farmers and both levels of government had placed over $3.4 billion into it. In 2015 Bob was inducted to the Manitoba Agricultural Hall of Fame.
Bob and Lynne were adventurous travellers with trips to Alaska, South America, Africa, Europe, the Caribbean, and Japan.
Bob and Lynne sold their farm operation in 1995 and retired to Brandon. In retirement, Bob enjoyed golfing, time at the cabin at Clear Lake, visiting children and grandchildren, and the social interaction with farming friends at the Husky coffee shop.
Bob was a humble, quiet (except for his boisterous laugh), kind man. He will be missed by his surviving family: his loving wife of 57 years, Lynne (nee Shanks); their four children, Leanne Kohtala (David), Allen, Glen, and Susan (Biagio); and their seven grandchildren, Sara and Matti Kohtala, Alex (Alain) and Sebastien Hopley, and Anara, Kindra, and Seth Hopley. Bob also leaves behind two sisters, Jean Hutchings (Bill) and Eunice Sherris, and his nieces and nephews.
A private Celebration of Life was held at Memories Chapel, Brandon on Tuesday, August 31, 2021. The family invites you to view the recording of the service and tribute video from Bob's memorial page at www.memorieschapel.com (direct link to tribute video: https://youtu.be/trU2OLlAz5Y). We are deeply appreciative of all who attended or sent messages of condolences.
Donations in memory of Bob may be made to Parkinson Canada - Manitoba Region, 316-4211 Yonge Street, Toronto, ON M2P 2A9, www.parkinson.ca.


Expressions of sympathy may be made at
www.memorieschapel.com


Robert "Bob" William Hopley, beloved husband of Lynne and loving father to Leanne, Allen, Glen, and Susan, passed away peacefully at his home in Brandon on Wednesday, August 25, 2021.
A private service will be held. The family invites you to view the Celebration of Bob's Life remotely on Tuesday, August 31, 2021 at 1:00 p.m. from Bob's memorial page at www.memorieschapel.com. Private family interment will be held at the Brandon Cemetery.
Donations in memory of Bob may be made to Parkinson Canada - Manitoba Region, 316-4211 Yonge Street, Toronto, ON M2P 2A9.
Complete obituary information to follow.


Expressions of sympathy may be made at
www.memorieschapel.com