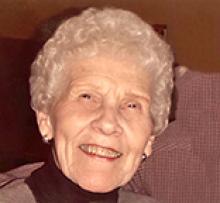 It is with deep sadness, that the family of Doreen Dixon announce her peaceful passing on August 21, 2021 at the age of 89. Doreen had been residing at the River East Personal Care Home in Winnipeg for the past year.
Mom leaves to mourn her three children: Alan (Debbie) of Winnipeg, Jeff (Betty) of Fort Smith, NT and Lori (Kevin) of Winnipeg, grandson Alex and granddaughter Jessica. She is survived by her sister Linda Shook, brother Jack Carlson (Sally) and sister-in-law Bernice Oleschuk. Many cousins, nieces, nephews and friends are saddened by Doreen's passing. Doreen was predeceased by her parents, Oscar and Edith Carlson (Black), her half brother Victor Larkin (Myrtle), half sister Ella Robbins (Jack), sister Norma Hawell (Joe) and brothers, Bob (Wilma) and Doug (Mary). Mom was predeceased by Frank C. Dixon, her loving husband of 64 years, in 2018.
Doreen was born in Headingley, Manitoba. In the late 1930's the family moved to Winnipeg where she attended school. Mom enjoyed playing baseball in her youth and this carried over into her adult life, as she was an avid Bluejays fan. In her teens, Doreen spent many summers at Uncle Walter and Aunt Millie's farm near Portage la Prairie. Mom met Frank, the love of her life shortly after the Second World War. It was love at first sight! Doreen and Frank married in 1953 and raised three children. A mother and home-maker par excellance, Doreen also worked part time at the Hudson's Bay Company and Eaton's in downtown Winnipeg. In their retirement years, Mom and Dad enjoyed summers at their trailer at Spruce Sands, volunteered extensively with the Telephone Pioneers of America, vacationed in Victoria BC, and was dragged along on many northern fishing trips! Doreen will be forever remembered for her unwavering love of family and kindness to anyone she knew. A Celebration of Life will be decided at a later date.
Voyage Funeral Home, Hespeler Avenue, in charge of arrangements.
If desired, memorial donations may be made in Doreen's name to the Alzheimer Society of Manitoba, 120 Donald Street, Winnipeg, Manitoba, R3C 4G2.
The Dixon family wishes to send a heartfelt thank you to the staff at River East Personal Care Home.