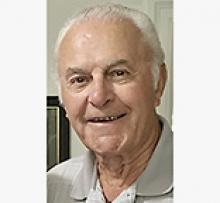 It is with great sadness that we announce the passing of Jim Reed on August 12, 2021.
Jim will be sadly missed by his sister Eleanor, niece Cindy (Arthur) and his many friends.
Jim is predeceased by his parents, Arthur and Amanda Reed and his brother-in-law Ross Murdoch.
Jim was born in Winnipeg on December 20, 1933 and lived in Winnipeg for his entire life.
At the age of sixteen, while still attending school, Jim began working part time with his father's construction company, Reed Construction. Jim continued to work with the company until it dissolved in the early 1970s. A few years later he started working with Smith Agencies Ltd. and was manager of the Maintenance Department for seventeen years.
Jim spent many summers at the family cottage in Clear Water Bay, Lake of the Woods. During the winter months, he curled at the Granite Curling Club and occasionally entered bonspiels with his brother-in-law Ross.
Jim enjoyed planting and maintaining the flower gardens at his home. He also loved taking long walks in the fresh air, outside of the city.
Jim was a skilled wood worker and has left family and friends with many cherished pieces of his work. In his later years, Jim developed an interest in wine making and won several awards for some of his specialty blends.
Although Jim spent some time golfing when he was younger, he was passionate about it in his senior years and it became one of his favourite pastimes. Jim was still golfing at the age of eighty-seven.
Jim cherished his close friends and appreciated all of the time they spent together. Those who knew Jim well, would recall him frequently sharing stories about what life was like when he was young. Jim spoke fondly about times when life was simpler. He read his bible faithfully.
Jim was fortunate to have lived a healthy and active life until shortly before his passing.

"God has him in his keeping,
We have him in our hearts"
We will love you always.

A graveside service was held at Chapel Lawn Memorial Gardens on August 26, 2021.