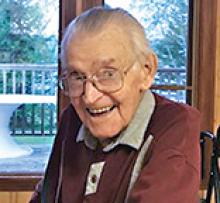 It is with deep sadness our family announces the passing of our father, grandfather and great-grandfather on August 22, 2021.
Raymond is survived by his sons, Drew Charlton (Angela Paskie) and Bradley Charlton (Candace Charlton (nee Bakuska)); his grandchildren, Tyler Charlton (Kayleigh Cline), Jeffrey Charlton, and Erin Charlton; and his great-grandchildren, Alexander Charlton and Declan Charlton.
Raymond was predeceased by his wife, Corrine Charlton (nee Armbruster), and their beloved son, Dallas Charlton.
Raymond was born on May 26, 1930, in Toronto Canada. He was the only child of Margret Wall, who later married William Charlton, thereby giving him the Charlton name.
It was as an only child he developed his caring nature and love of the cinema. A tour in the Royal Canadian Navy and subsequently the Royal Canadian Air Force produced a distinction he would later boast about his whole life: "I could fly a plane before I had a driver's licence."
Ray ventured west, where he met and married Corrine Armbruster. Corrine, with her three brothers, immediately brought him into the family, and Ray soon became the dad he always wanted to be.
While raising his family, he found he loved the car business and he became a staple of the industry over the next 35 years. There wasn't any dealership he couldn't "whip into shape," from Ford to Audi.
As good a "car man" that he was, he was a great dad.
He loved being with his boys: being at the lake, fishing, camping, spending time at the park, going to drive-in movies, or becoming a Scout Leader when no one else would. Ray was involved and that is what made him the "Cool Dad." Watching his family grow was special for him. Providing encouragement to his sons and wisdom when asked, Ray saw that his guidance had not fallen on deaf ears.
Sadly, in April of 1979, his youngest son passed away, and, 13 years later, his wife of 35 years passed away. Remarkably, in the face of that sadness, he found a new, even more rewarding phase of his life. For the next 30 years, he was determined to enjoy every minute of that time with his two sons and their families. Ray became the patriarch of the family. Already "dad" to Drew and Bradley, he also became "granddad."
His love of golf kept him active, and at the age of 79, after decades of playing, Ray had not one but two holes-in-one that year. He would spend as much time and energy as he could helping his family well into his late 80s. Being as active as he was, it was a great pleasure for him to help Drew with work at his acreage. He always enjoyed cutting the grass on the riding mower. He also travelled to Calgary every year to visit his grandchildren at Christmas. He took great pride cooking for his family on these occasions and was famous for his turkey soup, as well as what everyone called "hamburger and gravy".
But nothing compared to the joy he took in the preparation for what became the "Annual Fishing Trip". Having instilled a love of fishing in his two sons, he took great pride in being part of his three grandchildren also developing that love of fishing and the outdoors. His preparation for the trip usually started in January, even if the trip would not take place until August. With his list in hand, we were guaranteed never to forget a thing. Even after age kept him out of the boat, he still insisted on being there with his family.
He loved his family and we loved him.
As per Raymond's wishes, there will be no service.
In lieu of flowers, donations may be made to the charity of your choice.