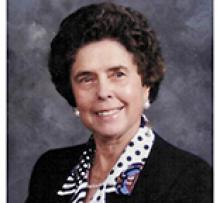 After a life well lived with many blessings, we announce the peaceful passing of Helen at the Grace Hospital. She was a resident of the Saul and Claribel Simkin Centre, where she was cared for by a staff of loving, empathetic professionals.
Helen was the middle child of three to William and Jessie Tureski in Rainy River Ontario. She moved to Winnipeg after completing her high school education to work for Dr. Bachinsky. At that time, he taught her many medical skills and she became a valued asset to his practice. She was introduced to Tom Smerchanski through his circle of friends. They married in September of 1950 and a team they would become.
Together they built Lodge Theatre and began a life of hard work with a stressful pace. The advent of television saw the property repurposed into commercial office space. Today the name still exists.
Mother and father were faithful supporters of the Ukrainian Greek Orthodox Cathedral. Mother kept a dutiful membership in the Sisterhood serving during service and other activities. She has always been very proud of her Ukrainian heritage, keeping High Holiday traditions for us to enjoy and continue.
In 1978 she began a 30 year service to the Manitoba Museum of Man and Nature. She thoroughly enjoyed teaching young school aged children on topics such as Manitoba history, Boreal forest, the Inuit to name a few.
Tom and Helen established a fund with the Winnipeg Foundation that awards yearly, a scholarship and bursary in the Faculty of Nursing University of Manitoba. The fund has also supported CancerCare, Children's Wish Fund, Vaselka summer camp, and Parkinson's research.
With my father's passing in 2000, Helen has lived independently in her home, even travelling by herself on a tour to Europe - a big change for her having always gone with my dad. They both loved Hawaii and returned many times. 2016 became a transition time, another chapter in her life. She moved to assisted living in the Wellington for four and one-half years, made many friends, but for the most part loved her solitary life and her long respected friendship with her sister in law Helen who also lived there. Her battle with Parkinson's disease progressed such that she was moved to the Simkin Centre this past January.
Her family would like to humbly express their appreciation for all the home care that was organized for her to maintain levels of independence with dignity. Profound appreciation to the Simkin Centre that cared for her lovingly during her last months.
Left to mourn and carry the memories are her daughter Valerie (husband Rob); grandchildren: Larissa with husband Michael, Jonathan, Justin, and Lauren; great-grandchildren, Gabriel, Noah and Ava. She was predeceased by her husband Tom in 2000, her son Tom Jr. in 2015; brothers, Peter 2014, and John 2021.
Flowers gratefully declined, if you so wish a contribution to Parkinson's research or charity of choice.
We will hold a celebration of her life with a service at 10:00 a.m., Friday, September 3, 2021 at the Glen Eden Funeral and Cemetery, 4477 Main St., West Saint Paul.