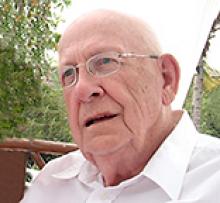 Peter Fehr was born to Henry and Helen Fehr (nee Elias) in the Haskett area on April 6, 1932. On November 1, 1956, he married his loving wife Mary (nee Kehler). In 1957, Mom and Dad moved to Winnipeg and started their family. Maryann was first born and a few years later their second daughter, Tina joined them. Dad was a mechanic, but also drove long haul for a while. He was a "wheeler dealer" who would sell anything except "the wife and kids." Fixing is what dad like to do! Nothing was ever thrown out until Dad had a chance to take it apart and try to fix it. Even in his later years, he like to go to the Thrift Stores and pick up items that he could possibly fix and that he could bring back to the Thrift Store for them to sell. He was saddened when his vision and dexterity made it impossible.
Dad loved to visit with friends and family and made friends wherever he went. They had friends that they kept in contact within Winnipeg, as well as in Sanford, where they lived for several years before moving to the Buhler Active Living Center in Winkler. Children and babies – Dad loved them all. He would chat with and entertain all the children he ran into, whether he knew them or not! With his passing, we know there will be a lot fewer Lisas and Billies in this world, as that was what he call all the boys and girls that he saw.
Dad survived all of his nine siblings. He was predeceased by his son-in-law Lorne. He leaves to mourn his wife of 64 years, Mary; his daughter Maryann; grandchildren, Roxann, Cherylann, Ivan; great-grandsons, Kolin and Adam; his daughter Tina (Bryan); grandchildren, Lindsay (Jim), Tyler. He also leaves his sister-in-law Susan, as well as Mary's sister Tina (Leonard) and Mary's sisters-in-law, Nettie and Hilda and numerous nieces and nephews.
The last few months were difficult for Dad, as he had a lot of pain, but thanks to the wonderful care he received at Boundary Trails Health Centre, his pain was kept at bay.
Donations may be made to the BTHC Foundation designated to the Palliative Care Unit.
A private service was held with ash interment at the Harvest Heritage Columbarium in Winkler.