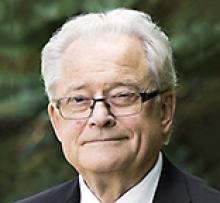 John was a beloved husband, Dad, Opi, brother, uncle and friend who was called home to be with his Lord and Saviour after a long battle with cancer and dementia.
A community leader and renowned Hematology/Oncology physician, John built the foundations for research in Manitoba through the St. Boniface General Hospital Research Center, earning him local and national awards including the Order of Canada. John's authentic love, humble service, faith and sense of humour will be what is remembered and will give his family comfort through this difficult time.
John was predeceased by his wife Gisela (2013) and his brother George (1967) and is mourned by his wife Elfriede, his children, David (Juanita) Foerster, Steven (Jackie) Foerster and Susan Foerster (Ed Wang), his stepchildren, Leona (Ralf) Owzarek, Debbie (Norbert) Werner, Dan (Michelle) Kuenstler, his grandchildren (eight) and step grandchildren (seven) along with his sister Anne (Charles) Kunze, nieces, nephews and the extended Foerster, Volkner and Behnke families.
While John will be dearly missed, we know his pain is gone, his mind has been healed and he is in heaven singing God's praises with that great baritone voice.
Special thanks to the teams at CancerCare, Palliative Care Riverview and Donwood Manor for their thoughtful, kind and exceptional care.
In lieu of flowers, donations may be made to the St. Boniface Hospital Foundation, Cancer Care Manitoba or Camp Nutimik Foundation.
Viewing will be held 7:30-8:30 p.m. September 10 at Friends Funeral Service. Celebration of Life on Saturday, September 11 at 11:00 a.m. at McDermot Avenue Baptist Church.
Further details including online options can be found at https://friendsfs.ca.