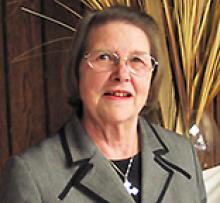 Dr. Lois M. Brockman passed away peacefully during a short stay at Seven Oaks hospital on August 26, 2021 at the age of 89.
Lois is predeceased by her parents, Henry and Agnes Brockman and her brothers, Arnie and Irvin.
She is survived by her sister Jeanne; her aunt Bertha; many nieces and nephews; great-nieces and nephews and great-great nieces.
Lois was born in Humboldt, SK. She grew up on the family farm, learning about agriculture and engines from her father and gardening, baking and canning vegetables from her mother. When she was 15, she attended Ursuline Academy in Bruno, SK where she preferred ice skating and fund raising for the school yearbook, over studying.
Her academic excellence, evident from a young age, combined with a passion to serve the welfare of the underprivileged, led her to St. Thomas More College at the University of Saskatchewan, where she earned a BA in Social Sciences. She truly enjoyed her time at STM with fond memories of friends and activities at Newman Centre.
Lois then worked as a social worker for the Saskatchewan Welfare Department for one year. With a desire to truly dedicate herself to the needy, she decided to join Our Lady's Missionaries in Alexandria, Ontario. As a Novitiate, she became Sister Mary Agnes and taught grades four through 11. A highlight from this time, was teaching the children how to grow container gardens in the classroom. She found that dedication to a cause and religious life were not the same and before her final vows, Lois decided to leave OLM.
Now needing to find a profession, Lois recounted her time teaching grade five and six, where she was exposed to eight children who functioned at a grade one level and two others, whom the school nurse referred to therapy for emotional problems. She felt the education system had failed these children, prompting her desire to learn more about child development.
This propelled her into a master's degree in clinical and experimental psychology at the University of Windsor. There she was encouraged to pursue a doctoral program at Cornell University in Ithaca, NY. At Cornell, Lois would do her doctorate in child development and family relationships in the College of Home Economics. That year, she was also a student resident assistant responsible for 240 freshman girls.
In October 1964, Lois moved to Lima, Peru to do her dissertation research in the Barriadas for six months, where she studied malnourished children. Working with these children and parents was true missionary life.
Upon completion of her Ph.D., she taught in the Psychology Department at the University of Saskatchewan for one year, the University of North Dakota for four years, then received an invitation from Home Economics at the University of Manitoba to assist in developing their new Department of Family Studies.
Strong child studies programs at the undergraduate and graduate levels were developed during her tenure. Her research focused on cognitive development in infancy and early childhood, on memory, sensory and language development and mastery motivation. She was a principal investigator on the 1988 National Child Care Survey, the largest social science survey conducted in Canada to that date.
In 1974, the University of Manitoba honoured her with the Graduate Students Award for Excellence in Graduate Teaching. In 1985, she was awarded with the Dr. and Mrs. Ralph Campbell Outreach Award. Another of her career highlights was being asked, in the 1980s, by then MLA Muriel Smith, to Chair a committee to establish the certification of childcare training programs in the Province of Manitoba.
Lois retired from teaching in 1997, just as the Red River was about to flood the city and her Winnipeg home. She continued to serve as a Senior Scholar and later in her retirement, became an active member of the University of Manitoba Retirees Association, serving as President from 2002-2009 and helping to establish scholarships and bursaries in their name.
In her spare time, Lois enjoyed attending the Winnipeg Symphony Orchestra, curling at the Pembina Curling Club, doing the annual bird count and gardening. In her later years, she enjoyed watching wildlife cross through her back yard, from her deer, to woodchucks, to her beloved chippies.
A private family service will be held at the Neil Bardal Funeral Centre on Friday September 10, 2021 at 11:00 a.m. The service will be live-streamed and available to view on Lois's obituary page at www.neilbardalinc.com. It will remain available on the website to watch at a later date.
Donations in Lois's memory may be made to the Endowed Professorship in Child Development at St. Thomas More College, which Lois established to honour her parents, Henry and Agnes Brockman.