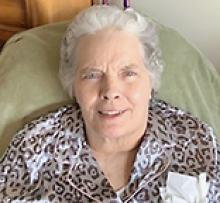 It is with great sadness that the family announces the passing of Kathleen Valerie Maier on August 30, 2021. Known to all as Valerie, she was the youngest of six children born on May 18, 1951 in Gimli Manitoba.
Valerie was predeceased by her parents, Sam and Laura Peterson; sister Mekkin Shaw, sister Lucille Lane and brother Gordon. She will lovingly be remembered by her husband Wayne (Porky) Maier of 35 years; sister Karen Smith; brother Robert; sister-in-law Joyce Peterson; many nieces and nephews and long time friends, Holly and Jim Cumming.
Valerie was a woman of many talents. Her athletic prowess was recognized during high school, attending Gimli Collegiate and while getting her Bachelor's Degree in Physical Education at the University of Manitoba. She excelled in many sports, including playing on the University of Manitoba women's volleyball and field hockey games, as well the Manitoba Women's Handball team. She especially excelled in track and field and in javelin, where she held the title of Canadian Women's Javelin Championship. Family and friends are very proud of Valerie's achievements, winning many medals and trophies when competing in Manitoba and Canadian Junior/Senior Championships, Manitoba and Canada Summer Games and international competitions.
Upon leaving the athletic arena, Valerie became a Psychiatric Nurse. She had a rewarding career at the Selkirk Mental Health Centre before retiring in 2011.
Valerie also had a musical talent and was self taught on piano, accordion and mandolin to name a few. One of her most enjoyable times was teaming up with Andy Yablonski, long time local, celebrated and renown musician of Fraserwood. She and Andy played together at many musical gigs around the province, spreading joy and laughter.
Another exemplary musical gift was her voice and she began singing in several choirs including West Shore Singers, Winnipeg Icelandic Choir and of special note the O. Koshetz Ukrainian Choir of Winnipeg. She extended her musical interest by becoming director of the Gimli Bell Ringers, who performed at Gimli Lutheran Church and locally.
Valerie had many happy moments composing keyboard music, playing with her cat Loa, watching the birds feeding at her many feeders and having hot chocolate and toasted cinnamon buns with a friend at the Cafe Haus. She was also an avid fan of the Bombers and Jets, always reviewing the games with Joyce. Valerie was very proud of her Icelandic heritage and especially enjoyed a trip to Iceland, connecting with relatives and culture.
A special thank you to Gimli Hospital and CancerCare. In lieu of flowers, donations can be made to The Gimli Humane Society; Industrial Park, 33 Harvard Avenue, Gimli, MB, R0C1B0,

It is with sadness and with love that we say:
"Kveoja oh vertu i frioi"
Farewell and be at peace.

A service announcement will be made at a later date.
Condolences may be left on Valerie's memorial page at www.interlakecremation.ca