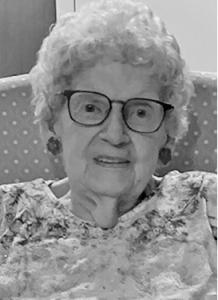 BAMBRIDGE: It is with thankfulness to the Lord that He has taken His faithful servant, our mom Edna Maxine "Mickey" to be with Him and her husband (our dad) the late Walter Ernest "Ernie" Bambridge. Mom passed on Wednesday, July 28, 2021. Mom was the last survivor in her family and dad's family. We used to tell her that was something to brag about but she didn't think so. Mom was born January 26, 1931, in Vicount, Saskatchewan to Edna and Stanley Jay. The family moved to Hamilton, ON during the thirties for better employment and to be closer to family. Mom and her mother moved to Lauder, MB when Grandma married Herb Swerdfeger. Mom used to say he was the kindest, most loving stepfather a sixteen old girl could ever have. After High School mom attended Business School in Brandon. She was a Permit teacher for a year at Hernfield School. It was at this time she met Dad at a dance at Waterloo School. Mom would say, "she met her Waterloo that night". Mom then moved back to Brandon and worked at Eaton's Department Store until she and dad were married on July 5, 1952 in Lauder MB. Mom became a farm wife and had a real learning curve for a girl who grew up in the city. They farmed in the Waterloo District. Mom had a very creative side to her. She could draw, paint, write poems, play the piano, sew, and do every kind of handwork there was. Dad used to say, "he had to do a lot of curling so she could get her handwork done." Her creativity came in very handy over the years with necessity being the mother of invention for the many projects she took on. Mom and Dad were both very involved and dedicated to the different churches they attended throughout their lives. They joined the Gideons in 1974, which they thoroughly enjoyed and gained some very good friends in their Turtle Mountain Chapter. Mom had a great sense of humour, which brought her through a lot of hardships in her lifetime, and which she kept right up to the very end of her days. Dad and Mom had retired to Deloraine in the fall of 1988, where mom continued to live after Dad passed in 2000. Mom then moved to Brandon in September 2015 and resided there until her passing. Mom leaves behind her children Wendy; Brenda (Daryl Nestibo) and family Jarrod and Diana and Eli, Caitlin and Justin Dalton and Harper; and Jim (Sherilyn) and family Joshua and Sabrina and Tahlia, Coen, Jaylin and Lillit, and Cassandra. Mom's grandchildren and great grans were the highlight of her life like most grandmas. Mom is survived by many nieces and nephews as well, all the way to the great, great, greats on both her side and Dad's side of the family. What a legacy. Mom was predeceased by her parents, stepfather, parent in-laws, brother, and all her sisters-in-law, and brothers-in-law. We want to thank the staff at Valleyview Care Centre for the care and concern they gave mom in just over the last year that she lived there. It was especially hard during the pandemic, but a high degree of care was still given to her, for which we want to say thank you so much. Thank you for taking the time to read our mom's story and we are grateful she is now at peace forever. The Memorial Service will be held at Bethel Christian Assembly, 440 Richmond Avenue, Brandon on Saturday, September 18, 2021 at 1:00 p.m. with Rev. Glen Whetter officiating, assisted by Henry Reimer. For those not able to attend in person, the service will be webcast on Micky's memorial page at www.memorieschapel.com. Mickey will be laid to rest in a private graveside service at Waskada Cemetery. Donations in memory of Mickey may be made to the Gideons International of Canada, Box 3619, Guelph, ON N1H 7A2 or Turtle Mountain Bible Camp, Box 1198, Boissevain, MB R0K 0E0.