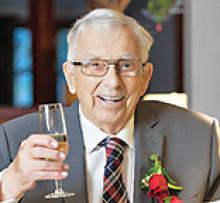 The Williams family is sad to announce the death of their father, grandfather, and great-grandfather, Edward Joseph (Joe) Williams at his Nanaimo home on August 18, 2021, in his 104th year.
Dad was born in Brandon on January 28, 1918 and grew up in Winnipeg and Thunder Bay. His dear sister, Marjorie, died in 2006. He served for six years, 1939-1945, overseas in the UK, France and Iceland during The Second World War, first with the 4th Field Ambulance and later received his commission in the Royal Armoured Corps from Royal Military College, Sandhurst.
He had a long association with northern Manitoba and served as the first MLA of the new constituency of Churchill in Duff
Roblin's government in 1957-1958. He was then managing Regimental Institutes, the non-military activities at Fort Churchill.
Later he managed the Hudson Hotel in Churchill and served as President of the local Chamber of Commerce. He was in good part responsible for bringing the first tv station to Churchill in 1965. He moved to Fort Smith, NWT, in 1965 as Director of Industrial
Development for the Mackenzie District until moving to Ottawa, Moose Factory, and Peterborough, serving with Indian Affairs
until his retirement in 1983.
In celebration of his 100th birthday, his
family established an annual bursary for Northern Manitoba students attending the University of Manitoba.
Joe is predeceased by his wife Ella (2001). He is survived by sons, Hector, Bruce and David (wives, Caroline, Cathy and Brenda), grandchildren, Elizabeth Dylke, Emily
Williams and Andrew Williams, and great-grandchildren, Mataya and Hugo Dylke, and Torin Joseph Mackay-Williams.