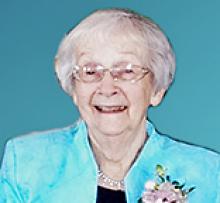 Helen Anne Fearn passed from this life on September 6, 2021, in her 98th year, following a heart attack on September 4. She lived a life filled with joy, compassion and love.
Helen was born in Port Arthur, Ontario on November 21, 1923, to Louis and Margaret (Watson) Mowry. With older sisters, Marjorie, Grace and Gladys, they moved to Toronto when she was 14. During the Second World War, she met and subsequently married a dashing young R.C.A.F. member, Douglas Fearn and they were happily married for 53 years until Doug's death in 1998. Most of their married life was spent in Winnipeg, Doug's hometown. They lived in the West End, Westwood, then downtown at Fred Douglas Place. When Helen moved to Thorvaldson Care Centre in May, she had been at Fred Douglas for over 25 years and made many friends there.
Helen and Doug took several trips especially after retirement. They enjoyed WSO Pops concerts, reading, lawn bowling, square dancing and bridge. Gatherings with family and friends were cherished memories. They were active in several churches over the years, including Chalmers United, Kirkfield Park United, First Presbyterian and Knox United.
Helen was an inquisitive soul who was keenly interested in the lives of her family, friends, neighbours and associates. She was a trail blazer in her time by pursuing a career, and to no one's surprise, chose social work. When her sons were teenagers, she went back to school and graduated from Red River Community College in 1969 with a gold medal in Welfare Services. She worked primarily in the field of adoptions, travelling throughout the province, assessing suitable homes for babies and young children. Always wanting to ensure she kept in tune with the times, Helen could discuss politics, religion, world affairs, finance and social trends with aplomb. She will be dearly missed.
Helen leaves two sons, Doug (Nancy) and Greg (Linda), five grandchildren, Christopher (Jenifer), Cameron, Kate (Chris Paget), Alison and Sandra (Blaine Duffield); eight great-grandchildren, Jacob, Caleb and James Fearn, Conner, Jackson and Makenna Paget and Keagan and Levi Duffield; nieces, Beverley Heald and Margaret Ann Kitching and nephew Ted Heald, also many relatives on the Fearn side of the family.
She was predeceased by her beloved husband Doug and great-grandson Joshua Fearn.
The family is grateful to Provincial Home Care workers, Thorvaldson Care Centre and also to the staff of St. Boniface Hospital Emergency and 4E for their compassionate care in Helen's final 54 hours.
Details regarding a memorial service will be announced at a later date.
In lieu of flowers, please consider a donation in Helen's memory to a charity of your choice.