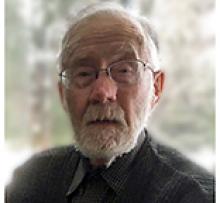 Arthur (Louie to his family) was born and raised in St. Boniface. He was predeceased by his beloved wife Carol Ann (nee Swedlund) in 2007. Early in his career Arthur served for a short time in the military (Army) as a driver instructor. He was proud to be a Canadian Veteran. His last career was in benefits administration where he was a loyal employee for many years until retirement.
Arthur and Carol were avid travellers. Seeking adventure, they moved to California for a short time enjoying meeting new friends and spending time with family. In retirement they frequently travelled to Europe where their favourite destination was Switzerland. They also made several trips to the United States visiting family. Arthur loved sharing stories about their travels. He enjoyed his pet Dachshunds and they provided many years of companionship. He always remembered special occasions by sending cards and phone calls.
Arthur was a proud man and lived life on his terms. He was always well dressed in his signature wool vests. Arthur maintained his independence as long as he was able to. He did not complain as his health changed and was thankful for the care he received. Arthur (Uncle Louie) will be missed by family, neighbours and friends whom he met for lunch at Kildonan Place and Perkins. He is reunited with the love of his life and best friend Carol whom he deeply missed.