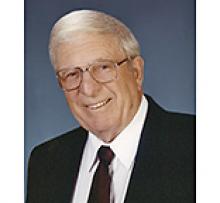 "Sometimes you will never know the value of a moment until it becomes a memory."

Born in Winnipeg, MB, son of George and Winnifred Ellis. Predeceased by his parents and his brother Alvin.
Survived by his wife of 70 years, (June 1951) Sylvia, and his five children: Deborah, Sally, Leslie, James and Tracey; special daughter-in-law Lori, sons-in-law, Mark and Harold, eight grandchildren and eight great-grandchildren.
Fred's sister Pat Lister of White Horse, YT, referred to her childhood brother as the boss of Nora Street, where they grew up. At a very young age in the 1930s he had a crew of children delivering papers, collecting scrap metal and sharing the profits with his crew.
During the 1950 Winnipeg flood, worked alongside others keeping pumps across the city working.
Early in the 1950s with a partner, Fred started Notre Dame Electric.
He started Dominion Armature Works with another partner in the early 1960s. Their main focus was motor rewinding and service which kept numerous manufacturing plants in Winnipeg operating, 24-7. Together they designed and patented a concrete extrusion machine, which continues to be a backbone in building construction today.
In the 1970s Fred purchased and expanded a small fastener company in Winnipeg, naming it DAW Steel Products Ltd. In the late 1980s he started a small diecasting company, Indutec Alchemist. Through out his career, Fred's drive to create and patent many new products was the force that kept him working well into his 80s.
When asked about his greatest achievements, he would say his family. Many of his children inherited his entrepreneur spirit and business successes.
In 1959 Sylvia and Fred purchased a cottage at Big Whiteshell Lake. There he taught his children about respect on the water. Safety of utmost importance. Swimming, boating, water skiing, fishing, all summer long while he commuted on weekends. Eventually leaving Big Whiteshell for Rush Bay, Lake of the Woods. There he fell in love with sailing and passed on this experience with his children and grandchildren. At one time he took sailing lessons in Puerto Rico, a surprise to many, as he was self taught in so many of his achievements!
In the 1960s, Fred and Sylvia started travelling to warmer destinations during Winnipeg's winters. It was a time well spent with his best friend and love of his life. Sometimes travelling with friends or family or meeting new ones at their destination. So many memories and great experiences. One of them, in more recent years, a trip to see his sister Pat and family in Whitehorse!
Fred loved to curl and was an enthusiastic supporter of the Heather Curling Club. He was a Past President and Honorary Member. Fred and Sylvia both curled, had many friends there and some great fundraiser parties! Remember the Hawaiian night in February when he was Entertainment Chair?
Fred was a long-time supporter and season ticket holder of the Winnipeg Blue Bombers and Winnipeg Jets. Tickets were shared with his staff and family and grandsons.
Never missing televised games, was shared with others via phone calls during and after the games!
Fred and Sylvia have remained in their home until Fred's recent stroke August 18, 2021, when he was hospitalized. Thank you to the Home Care Assistance staff who took such good care of him.
Celebration of Fred's life to be held September 23, 2021 at the Glen Lawn Funeral Home, 455 Lagimodiere, Winnipeg, at 2:00 p.m. Attendance by invitation due to Covid restrictions.
Flowers gratefully declined. Donations to the Heart and Stroke Foundation or personal choice appreciated.