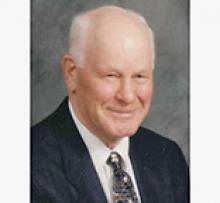 On August 30, 2021 Walter (Wally) Reynolds Moscrip passed away at Third Crossing Manor in Gladstone, MB at the age of 90.
Walter was born in Ogilvie, MB on the Paynter family farm. He grew up and attended school in Gladstone. At the age of 20, he joined the Canadian National Railway and was stationed at various communities across Manitoba, Saskatchewan, and Ontario. It was in Plumas, MB that he met and married Jean Bell. Walter retired from the railway in 1989 and he and Jean returned to their roots and settled in Gladstone. They became active members of the community serving on numerous committees with the Legion, golf and curling club, as well as other organizations. His two passions were golf and curling and over the years participated in many tournaments and bonspiels. He enjoyed many afternoons playing cribbage and pool at the Legion.
Walter was a kind, generous man; a true gentleman. He was dedicated to his family and when life presented its most difficult challenges, he remained strong.
His memory will be cherished by his daughter Lois (Doug) MacCallum, four grandchildren, eight great-grandchildren, sisters-in-law, Elaine (Bill) Schettler and Shirley Bell, as well as cousins, nieces, nephews, and friends.
Walter was predeceased by his wife Jean, sons, Craig, Beven, and an infant son who died at birth, grandson Charles, brother Stuart (Doreen), brother-in-law Jack Bell, parents, Charles and Isobel Moscrip, and parents-in -law, Cameron and Mary Bell.
Cremation has taken place. A graveside service will be held at Gladstone Cemetery on Thursday, September 16, 2021 at 1:30 p.m. The Cemetery is located two miles South of Gladstone on Highway #34.
The family thanks the Gladstone Homecare workers, the staff at Third Crossing Manor (you are true heroes) and Nurse Practitioner, Rebecca Krause.
If friends so desire, memorial donations may be made to Seven Regions Health Foundation for Third Crossing Manor, Box 1000, Gladstone, Manitoba R0J OTO.