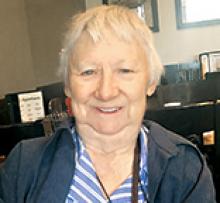 It is with deep sadness that we announce the sudden passing of Priscilla at St. Boniface Hospital at the age of 80 years.
Priscilla was born in Winnipeg and raised in the St. Vital district where she lived all her life.
Priscilla is survived by her sister, Irene Laurent of Winnipeg, brothers, Ray (Linda) of Wetaskiwin, Alberta, Wilfred of Winnipeg, sister-in-law, Gwen Smith of Winnipeg, many nieces and nephews, great-nieces and nephews, and many cousins.
Priscilla was predeceased by her parents, David and Helen (nee Marmonier) Smith, brothers, Richard and Gerry, sisters-in-law, Rose Smith and Susan Smith, and brother-in-law, Bill Laurent.
We want to pay tribute to this wonderful lady...our Sister, Sister-in-law, Aunt, Great-Aunt, Great-Great-Aunt, Cousin, and Friend, Priscilla Doreen Denise Smith.
Priscilla refused to be defined by her lifelong battle with rheumatoid arthritis. She was determined to retain as much independence as she could for as long as possible. Priscilla displayed tremendous strength in terms of coping with her disease. The pain it inflicted on her and the havoc it wreaked on her body over the years could have been the focus in Priscilla's life but she chose a different path. Priscilla chose to make the best of every situation. The joy she found in just being with people made it a pleasure to be with her. With Priscilla, the cup was half full - not half empty. She was a trooper!
Priscilla worked in administration at the Health Sciences Centre Occupational Therapy Department in the Rehabilitation Hospital during the 1960s and 1970s until her retirement in the early 1980s. Priscilla kept in touch with some of the people she had worked with all those years ago and would plan annual luncheon get-togethers. Several years after retirement, Priscilla made the big move from the family home on Arden Avenue to Riverside Lions and, once she was settled into her cozy apartment, she began to immerse herself in the many activities offered at Riverside and took joy in making new friends along the way.
Priscilla was well known for her competitive nature as was evidenced in her "no mercy" strategy in cribbage. These skills were honed at the Red River Seniors card games. We are thankful for this great group. Priscilla eagerly looked forward to cards every Thursday at Norberry.
Sports were another passion for Priscilla. Although she had to give up bowling in later years, she readily became an avid fan of baseball, hockey, football, and curling. We would be hard pressed to know her favourite sport as she watched them all. However, she was anxiously waiting for curling to start.
Priscilla had given her heart to the Lord many years ago. She enjoyed Sunday morning worship services at both St. Eugene and Christ the King parishes over the years. She especially loved the hymns and could be heard humming a few bars of her favourites from time to time. (And maybe a few golden oldies, too.) Joy was in her heart. Bingo nights were another favourite pastime for Priscilla with pizza and hot dogs being the traditional fare Tuesday and Friday nights for many years. She had quite the collection of daubers!
Although Priscilla could display a somewhat feisty personality, she was also sincere and loyal. She developed many lifelong friendships and she fiercely loved her family. She defended her own, for sure!
Our lives have all been touched in a special way by Priscilla. We are all richer for having known her, whether it be for many years or for only a brief time. We will dearly miss her.
Priscilla always had the bluest eyes. They could be steely blue when she got her dander up and you'd think they were going to bore straight through you. On the other hand, they could become the most sparkling blue when she was up to something. You couldn't help but smile and wait in anticipation for what was going to happen next. When teasing, making a joke, or just plain being happy, Priscilla's eyes would twinkle. Perhaps the twinkle was the lenses after her cataract surgeries! But I think it was the joy she kept hidden in her heart that would escape every time she had a happy thought...and that happened a lot! Let us allow our happy thoughts of Priscilla to shine through our eyes and perhaps we will cause someone else to smile, too.
Due to Covid restrictions, a private family funeral mass will be celebrated at 11:30 a.m. on Wednesday, September 29, 2021 at Christ the King Roman Catholic Church with interment to follow at St. Vital Cemetery. You are invited to join us virtually by accessing the Livestream link at www.greenacresfuneralhome.com in the Upcoming Services tab.
The family would like to sincerely thank the many friends, a list too long for this space, who transported Priscilla and cared for her in so many ways over the years. Many thanks to the home care workers and the staff at Riverside Lions who made it possible for Priscilla to remain in her apartment. Thank you to the doctors and nurses at St. Boniface Hospital for caring for Priscilla in her final hours. Your phone calls and kind words are much appreciated.
In lieu of flowers, donations can be made to The Arthritis Society or to the charity of one's choice.
Condolences, tributes, and memories may be shared at Green Acres Funeral Home website: www.greenacresfuneralhomecom under Priscilla's obituary notice.