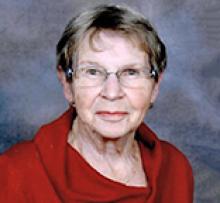 It is with sadness that we announce the passing of Florence Sherwin after a lengthy illness.
She was predeceased by her sisters, Ellen and Myrtle, and survived by her brother Allan and her husband of 63 years, Carlyle. Florence is also survived by her two sons, Mike (Caroline) and Rod (Jane), and her six grandchildren, Hank (Laurie), Alice (Kristjan), Tom (Hannah), Lucas (Mackenzie), Molly, and Isabelle (Dakota), and by great-grandson Arlo.
Florence was raised in a park Warden's cabin (better known as 'Rabbit Cabin') in Prince Albert National Park. She spent many years away at school and graduated from nursing in Prince Albert in 1955 where she made some lifelong friends. Florence married Carlyle Sherwin in 1958 at an outdoor wedding at Rabbit Cabin. After living in several locations, they settled in Winnipeg in 1964. There, she met her next-door neighbour Joan Whyte who became her lifelong friend. In Winnipeg, Flo worked for Fort Garry Realty for many years. Florence played in several bridge clubs for over 40 years. She was active in tennis, golf, and downhill skiing. She was an avid reader who also stayed up to date on news and loved to discuss current events and politics. Florence was an active volunteer with the Anglican Church and in the community. For the last 25 years of retirement, she and Carlyle enjoyed travelling to locations throughout the world including Australia, Hong Kong, Europe, Mexico, and a variety of other destinations.
Despite her small stature, Flo could be passionate and forthright with her opinions. Throughout her life, Florence cared deeply for her family and friends, and was loved by all for her kind heart and generosity.
The family would like the acknowledge the excellent care that Flo received at Concordia and Victoria hospitals as well as Deer Lodge Centre.
A private family service will take place at a later date.
In lieu of flowers, donations can be made to the Alzheimer's Society of Canada.